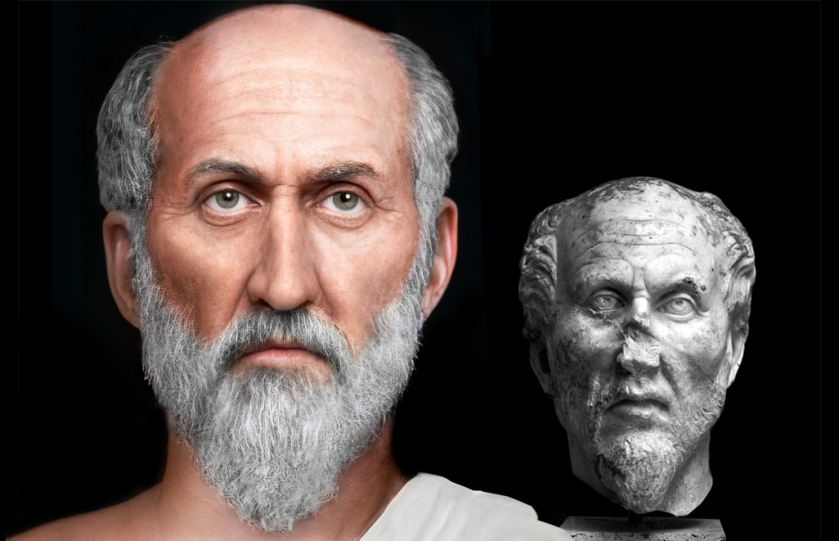 Christian theology separates reality into a physical world and a spiritual realm – or a disembodied (intangible) soul that stands in opposition to a world of tangible physical matter. The ancient Greeks did not think this way (even though Christian theologians hijacked and distorted many Greek philosophical terms), and modern science does not accept this religious dichotomy (primarily because such a religious notion cannot be perceived and measured). Plotinus – being probably the last great Greek philosopher – also did not make use of this Christian thinking (in fact, he criticises it one text) – and many may be surprised by the fact that he appears to view existence as comprising of of a gross or ordinary realm of matter, which is directly related to the realm of rarefied thought, perception and understanding – which is representative of ultimate matter. This ultimate matter is the formless reciprocal within which all thought forms take shape as definite objects – but ordinary matter is unsatisfactory and unreliable because it is not constant and always in a state of flux (an argument very similar to the ‘impermanence’ theory of the Buddha). Plotinus also does not know ‘how’ thought forms (which can be sensed by an appropriately trained mind), are able to take physical shape. On the face of it, this seems like ‘idealism’, but I suspect that it is not, as Plotinus also recognises that the world of physical matter also creates and conditions itself in a manner independent of the human mind that perceives its activity (again, similar to the Buddha’s idea of dependent origination)  The reason I think it is not ‘idealism’ is because thought is itself a very subtle frequency of physical matter. In modern terms this is the equivalent of stating that matter is gross energy, whilst consciousness is subtle energy. It could also be expressed as consciousness being a certain frequency of light energy, whilst physical matter is congealed light energy – or light energy slowed down (again, another frequency of light energy). Whatever the case, I suspect Plotinus fully understood that the world of matter was primary for biological life, and that through this biological existence, the rarefied state of conscious awareness that Plotinus undoubtedly experienced, could only be realised if the physical body (and the mind it contains) was trained in the right way. What is certain is that Plotinus does not at any point posit the idea that human consciousness pre-exists physical birth and post-exists physical death. For Plotinus, transcendence as he defined it, is realised through a physical incarnation, and not in-spite of it.