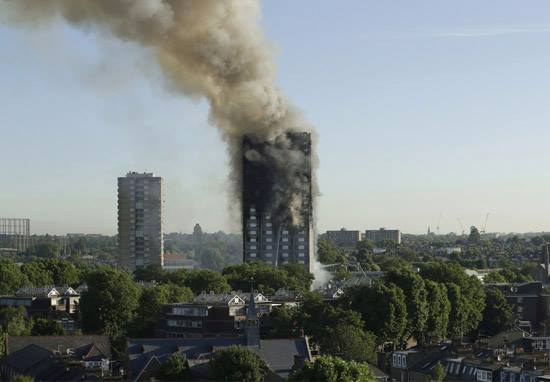 The Grenfell fire is a tragedy for the UK, the likes of which probably hasn’t been scene since Lockerbie disaster in 1988, or perhaps for London specifically, the ‘Blitz’ during WWII! Coming just days after a General Election fought over the effects of Tory (and LibDem) ‘Austerity’, the sad deaths of what night be around 200 people in this London tower-block, and the manner in which they died, appear to encapsulate a nation’s seven year suffering focused upon a single inner city community, comprised of ordinary Working Class people. Although it s true that the United Nations (UN) found the Tories (and LibDems) Guilty of Crimes Against Humanity in 2016 (for the deaths of between 10,000 – 80,000 people with disabilities due entirely to the effects of benefit and health service cuts), the very ‘public’ nature of Grenfell has brought the ‘callous’ nature of Tory policy into the open for all to see, free of any media denial or attempted cover-up. Indeed, the people who lived in the Grenfell tower-block were poor by the standards of the opulence that surrounded them in North Kensington, and occupied one of the last vestiges of ‘social housing’, with all the others Council buildings in the area having already been sold-off, to become the playthings of millionaires. Of course, the principle of Tory (and LibDem) ‘Austerity’ is nothing but an ideologically-led attack upon the British Working Class, which sees all modes of Socialist re-distribution of wealth abolished, with housing, health and other essential services, sold into the hands of unscrupulous privateers motivated entirely by the eternal quest for monetary profit, at the cost of human dignity and security. The inherent inequalities within the capitalist system are ‘blamed’ upon those who suffering under its tyranny, compounded by the lie that all it takes is conformity to middle class values, and everything will be alright! The British Working Class is historically ‘poor’ and ‘deprived’ not because of any lack of work ethic, but rather because that is exactly the disempowered state that the middle class wants to keep it in. The British Welfare System was very much a ‘compromise’ between the naked (and brutal) forces of predatory capitalism and (caring) Socialist ideology. The middle class could continue to be selfish and indifferent to the plight of the Working Class – just as long as that middle class paid its taxes and did not ‘interfere’ with the re-distribution of wealth. Well, since 2010, the Tories (and LibDems) have broken that tenuous ‘truce’ between the classes, and have unleashed tremendous (and sudden) inequality upon British society that has already killed untold thousands, and in a small part of London – increased the body-count in such an appalling manner that the barbarous nature of Tory ‘Austerity’ has been written clearly upon the London skyline! The duplicitous Tories are speaking of ‘millions’ being set aside for this or that help and improvement, but this does nothing for the victims of Grenfell (both living and deceased), and does not ‘stop’ or ‘turn-back’ the disastrous country-wide policy of ‘Austerity’ that continues unabated (despite this tragedy). It is not one-off ‘charity’ payments that the people of Grenfell (or the UK) need, but rather a strong and fully functioning Welfare System that is as compassionate as it is comprehensive, together with a fully funded and functioning NHS and Social Housing Programme. I suspect that if the Tories had not just lost their slim majority in Parliament, the rhetoric emanating from Theresa May would have been to script and very different. She would have ‘blamed’ the Grenfell people for the tragedy they had suffered – and the mainstream British media would have played-along – with the emphasis being placed upon the abolition of all Social Housing (because it is ‘unsafe’). As matters stand, Jeremy Corbyn’s resurgent and successful message of ‘compassionate Socialism’ has changed the political landscape, and the Tories are being forced to ‘pretend’ that they actually ‘care’ about the Working Class, when in reality, the exact opposite is true. The people of Grenfell must be helped in any and all ways possible without exception or limit, but this humanitarian effort should also serve as the springboard for a radical re-distribution of wealth throughout the UK – so that Working Class suffering is relieved everywhere!