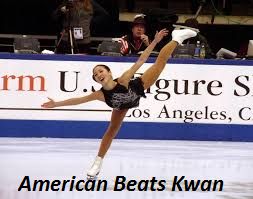 The White (blond) US champion figure-skater – Tara Lipinski (b. 1982) – carries a Jewish, Polish surname, that refers to people originating in places named after ‘lime trees’ in Poland, although, of course, she was born in the US to American parents of Eastern European descent.  In the 1998 Winter Olympics, she won a Gold Figure-Skating Medal, after having come very close to losing to her fellow American competitor Michelle Kwan (b. 1980).  Even today, the two respective Wikipedia pages treat these two women very differently with regards to their respective ethnicities.  Tara Lipinski, for instance, despite having parents with Eastern European names, is presented as an ‘American’, which in the coded language of Eurocentric racism, means ‘White’.  In fact her Eastern European ethnic background is completely ignored, and not examined at all.  All the reader needs to know is that she is ‘White’.  On Michelle Kwan’s Wikipedia page, the story is very different.  It is made clear that although she is born in the US, her parents are ‘immigrants’ from Hong Kong.  In other words, Michelle Kwan, using the same coded language of Eurocentric racism, is ‘not White’.  In the 1998 Winter Olympics, Michelle Kwan, as a world-class figure-skater, was dominating the event, when her opponent (and US team mate) Tara Lipinski eventually stole the show with her outstanding performances.  The two at the time were well-known for their competitive spirit against one another on both the domestic and international scenes. Michelle Kwan had beaten Lipinski a number of times, but in the 1998 Winter Olympics, she had to settle for a Silver Medal.  The reaction of MSNBC appears to show that amongst White Americans at least, the real battle was between White Americans and non-White citizens of the US who were not acknowledged as ‘American’.  The MSNBC headline ran ‘American Beats Out Kwan’, and White Americans started celebrating.  This racist mentality caused a peak in racially motivated violence in the US, and a number of Chinese-American groups to sell their souls by making public statements that they are ‘American’ too, as if saying ‘we act White’ because we live in the US.  In a multicultural society, people who occupy a single country, are by definition, ‘different’.  It is only when White racism dominates, that every other ethnic group is forced to become subservient to it.

MSNBC has tried to remove all mention of their racist headline blunder, and its eventual apology, which stated:

MSNBC apologizes for an error that may have been interpreted to
state that U.S. figure skater Michelle Kwan was not American.
The error appeared briefly in a scrolling marquee during
coverage of the Winter Olympics and was corrected quickly.
However, the marquee was picked up by MSNBCs push technology,
News Alert. So to some, it might have appeared the error was on
the site for a longer period or was not corrected. MSNBC
apologizes for the bulletins wording.