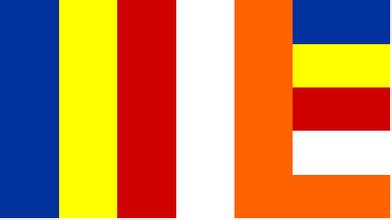 ‘By which four motives does he do no evil actions? Evil action are done from motives of partiality, enmity, stupidity and fear.  But as the Aryan disciple is not led away by these motives he does no evil actions through them’.

The infiltration of the Buddha’s teachings with bourgeois nationalism not only involves ‘angry’ Buddhists attacking non-Buddhists, or Buddhists living lavish lifestyles in the West whilst attempting to undermine other sovereign states, but is perhaps best exemplified by the ‘invention’ of a multi-coloured flag.  This ‘Buddhist’ flag represents a disturbing trend within certain areas of the Buddhist world actively engaging Western-style ‘nationalism’.  According to the logical assessment of the Buddha, this ‘flag’ is simply a collection of different coloured material, and has no other meaning beyond its material construction.  The philosophy of Buddhism rejects society premised upon greed, hatred and delusion that gives rise to ‘religious’ (or ‘theistic’) imagination.  The Buddha rejects this type of society because it is the conditioned essence of all human (and animal) suffering.  The Buddha at no time during his 45 years of teaching did he ever state that a follower of the Dharma should ‘compromise’ with greed, hatred and delusion, and uncritically accept the prevalent structures of society as being ‘valid’and ‘worthy’ of respect and support.  The flags of capitalist nations are premised upon ‘greed’ and ‘exploitation’ of the masses and as such should not be emulated by the Buddhist Sangha.  It is not a piece of coloured material that uproots greed, hatred, and delusion from within the fabric of the mind, but rather the practice of disciplined seated meditation, and strict behaviour modification through the following of the Vinaya Discipline.  Buddhists may be political, but politics are a matter of good judgement and wise decision. Good judgement and wise decision arise out of extended periods of intense meditation practised within an appropriate and conducive Dharmic environment.  Good judgement and wise decision is the product of non-greed, non-hatred, and non-delusion.  In other words, although the Buddha’s teachings are ‘apolitical’, Buddhists can apply the fruits of their meditative labours to assisting outer society move in a direction ‘away’ from greed, hatred and delusion.  Invariably this does not mean the supporting of capitalism, as that ideology is premised entirely upon greed, hatred, and delusion, and routinely inflicts suffering upon the masses.  Buddhists who think that greed, hatred, and delusion are compatible with non-greed, non-hatred, and non-delusion, are existing firmly within the realm of non-enlightenment.  The idea of a Buddhist flag is tantamount to Buddhist terrorism in as much as it symbolises the alignment of Buddhism with the modern, capitalist State, and signifies a disturbing trend of replacing Buddhist philosophy with the ideology of greed.  This is a false Buddhism that ‘normalises’ suffering in the mind and body of the masses.  In fact it is not ‘Buddhism’ at all, but rather a superficial mirage in saffron robes.