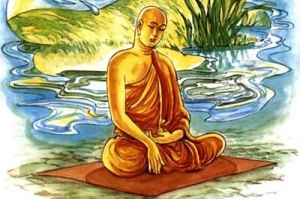 The Pali (धम्मपद) Dhammapada Sutta (Sanskrit (धर्मपद): Dharmapada Sutra), is known in the Chinese language as ‘法句经’ (Fa Ju Jing), and can be translated into English as:

The term ‘Dhammapada’ can then be translated as ‘Law Sentence Classic’, or ‘Truthful Path Perfect Wisdom Text’, etc. Although there are a number of extant versions of the Dhammapada (China has at least four), the generally received version contains 26 chapters comprised of 423 verses or aphorisms.

Juan Mascaro (in his Pali to English translation of the Dhammapada, Penguin Books, [1988], Page 49), translates this verse as:

‘And he who is free from credulous beliefs since he has seen the eternal Nirvana, who has thrown off the bondage of the lower life and, far beyond temptations, has surrendered all his desires, he is indeed great amongst men.’

This may be compared with Harischandra Kaviratna’s translation (from his version of the Dhammapada, translated from Pali into English, Theosophical University Press, [2001], Page 41), which reads:

‘He who is not credulous, who knows the nature of the Uncreated (akata), who has severed all the bonds (of rebirth), who has destroyed all the influxes of evil and given up all cravings, he, indeed, is noblest among men.’

In his 1993 translation from Pali to English (Page 91), Narada Thero states:

‘The man who is not credulous, who understands the Uncreate (Nibbana), who has cut off the links, who has put an end to occasion (of good and evil), who has eschewed all desires, he indeed, is a supreme man.’

The Chinese translation of the Dhammapada was made directly from the Pali. When translating the above Chinese verse into English, it reads:

‘He who does not rely on blind faith, realises the ‘non-active’ (無為 – Wu Wei) state of Nirvana. In this realised state of being, the shackles of samsara are broken forever, and there is no more rebirth. There is no more generation of good and bad karma, as all craving and desire has been abandoned. He is indeed a supreme being (Arahant).’

The Pali word ‘akata’ translates as ‘uncreate’, and this has been translated into the Chinese language through the use of the Daoist term ‘Wu Wei’ (無為). This is important in implication for the Ch’an idiom ‘language of the uncreate’., as it means that Ch’an doctrine is not only securely rooted in Buddhist scripture, but rooted in the earliest strata of that scripture. Wu Wei implies non-action not only on the physical plane (in theory), but also refers to the non-creation of ignorance in the mind. When the mind-function has been returned to its substance (i.e. the empty mind ground), all duality ceases, and there is no more ‘creation’ of ignorance in the mind. When the mind is beyond delusive thought construct, the body is freed from the desire to perform ignorant patterns of behaviour in the outer world – hence ‘non-action’.  Although Ch’an is beyond the suttas and sutras, Ch’an is not ‘anti-sutra’ and all true Ch’an masters possess an innate knowledge of Buddhist scripture content. If this was not the case, then the Ch’an method would deviate from the true Buddha-Dharma and would be heretical in nature. As it stands, the Ch’an method is nothing other than the Buddha’s pristine teaching clear for all to see.