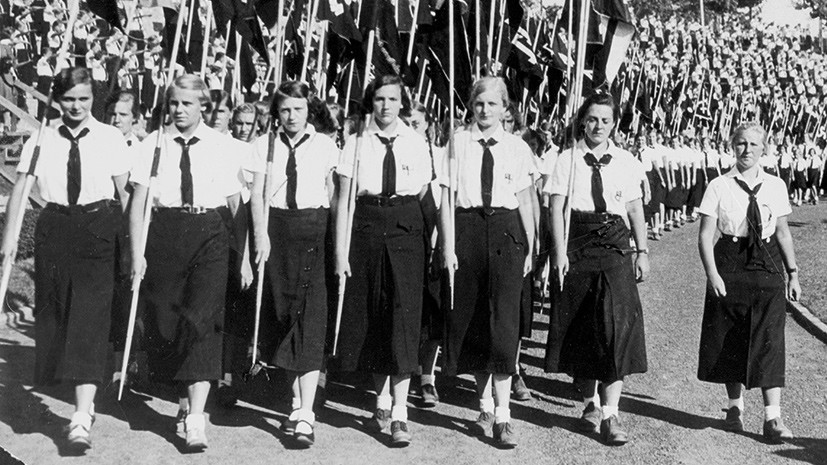 From 1930-1939, Poland developed an overtly ‘fascist’ State founded and directed by Jozef Pilsudski (a Trotskyite) – and the political foundation he created continued to guide Polish home and foreign policy after his death in 1935. Although Pilsudski respected the long-reigning fascist Mussolini – it was only when Hitler came to power in Germany (in 1933) that Poland overtly started to confidently exert its fascist credentials. This resulted in a State Visit from Joseph Goebbels in 1934 – Hitler’s Propaganda Minister – who advised the Poles on everything from ‘race’ policies to ‘military’ matters. Despite this encouragement from the ‘Aryan Race’, things were not quite what they seemed behind the scenes. Hitler – in his search for ‘allies’ of convenience in the short-term – was quite happy to indulge the Polish and give the false impression that they were ‘pure’ in race and ‘equal’ to the Germans in ‘racial hygiene’. Hitler was advised by his self-proclaimed ‘experts’ in the pseudo-science of ‘racial purity’, that a ‘perfect’ German was tall, well-built and possessed blue-eyes and blonde-hair – although these characteristics could vary whilst remaining ‘Aryan’ and therefore ‘pure’. A ‘pure’ German possessed a well-shaped head and broad-shoulders, was intelligent and quick to comprehend orders, take action and instantly understand change. He possessed strength of bone, and strength, stamina and endurance of musculature. He rarely got ill and was quick to recover from injury. When times were hard – he did not succumb to material circumstances but continuously strove to make things better for himself and his fellow Germans (i.e. the ‘Volk’). He was obviously heterosexual – and attracted solely to the racially superior German woman. The German woman was renowned for staying at home and creating an environment that made her husband ‘happy’ and ‘content’.

She was loyal and kept the house as clean and tidy as was her inner virtue! Like her husband – this perfect example of the ‘Aryan’ woman was strong and able to ‘resist’ (but not fight), and willing to give herself sexually whenever required to do so. Hitler firmly rejected the Marxist idea of ‘equality’ between men and women – and defined the ‘perfect’ woman as being both ‘strong’ and ‘servile’ to her husband! She could play sports but never assume to the ‘equal’ of a man in anyway. She never betrayed her husband and always supported his viewpoint and opinions. The high-ranking SS Officer Reinhard Heydrich (1904-1942) – was the driving-force who facilitated Hitler’s vision for a ‘racially pure’ Eastern Europe – and devised the various Nazi German methods and policies that fuelled and empowered the Holocaust in the numerous Concentration Camps, and the mass-murder throughout the USSR. For Hitler, ‘speed’ and ‘efficiency’ were the keys for ‘cleaning’ the racial climate – which was a Nazi German code for physically ‘clearing’ a geographical area through evacuation of the indigenous population to extermination points – where they were shot and gassed and their bodies quickly burned. In the meantime, designated ‘racially pure’ Germans were moved into the freshly cleared areas and life for the migrants carried-on as before – only with these individuals receiving ‘free’ houses, cars, money and clothing, etc, with no questions asked.

From 1938 onwards, the Nazi Germans perfected their racial purification processes and methods in the newly required territory of Czechoslovakia. This was initially termed ‘Germanisation’ and involved Nazi German (fake) academics who subscribed to the pseud-science of ‘racial hygiene’ – and who were given the task of providing concrete material data that could be relied upon to ‘prove’ the correctness of Hitler’s false racial ideas (formulated in his book ‘Mien Kampf’). Laughably, these (fake) Nazi German academics were referred to as ‘racial experts’. As so many people had already ‘mixed’, part of the problem was what to do with the offspring of racially pure Germans and racially impure partners? How was this ‘pure’ racial blood to be ‘disentangled’ from the ‘impure’ blood? Estonia was viewed as the ‘purest’ country (due to its ‘pure’ Scandinavian blood), followed by Latvia with Lithuania viewed as the worst (due to its ‘mixing’). Hitler and his experts viewed the Poles as being inherently ‘impure’ regardless of their social system of ‘fascism’. The Poles – according to the Nazi Germans – were a terrible example of racial ‘mixing’ and ‘corruption’. The Poles were the product of Europeans historically intermarrying with Gypsies, Jews and Slavs – with both these groups declared ‘decadent’ and even ‘dirty’ by Hitler. Hitler and his racial experts decided to play along with the Poles from 1933-1939 – when Hitler’s Generals advised him that Nazi Germany was now militarily strong enough to invade and ‘crush’ the racially impure Polish military! This background explains why hundreds of thousands of Polish people – who thought they were the fascist allies of Nazi German – were quite literally ‘murdered’ by their allies! This demonstrates the barbarism and moral bankruptcy of the Nazi German ideology and brutal social system!