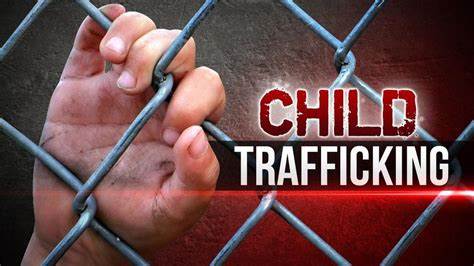 Presented as a ‘true story’ that headlined as happening during April, 2020 – the YouTube Channel entitled ‘Scary Mystery’ – hosted the (fictional) crime story regarding the kidnapping of 10-year-old boy named Marquise Gandy (from Tacoma, Washington, USA). Whilst walking home from school, he was knocked unconscious by his neighbour – whom he recognised as the husband of his school-teacher – Mrs Harrison. He awoke chained to a filthy mattress in the dark of an unfamiliar cellar, within which was ‘Paul’ – another young boy also similarly held prisoner. Three-weeks later – Paul is no longer there and Marquise was rescued by an undercover police operation. He had been periodically ‘starved’, held in a pit in the garden (that was full of the bones of other children), as well as other forms of inflicted cruelty. Marquise was eventually informed that his school-teacher (and husband) had been kidnapping ‘targeted’ children to sell their body-parts into the underground (and illegal) private health industry of ‘organ-harvesting’. Children were kidnapped by the couple according to the required ‘ethnicity’ and organs needed – and the script suggests that around 15 children fell victim to this hideous practice. Mrs Harrison (and her husband) received long prison sentences for kidnap, torture, murder and desecration of the human body, etc. On the YouTube Channel ‘Comments’ section, a number of people have researched this story and have realised it is fictional – but inserted into an entertaining narrative involving verifiable and true news stories.

I find this fictional storyline interesting, as the US-sponsored, supported and protected Falun Gong Cult, propagates exactly the same fabricated assertion against the Chinese government (and Communist Party of China). According to the Falun Gong Cult, the Chinese government executes Falun Gong Cult members and ‘harvests’ their organs for use in the Chinese medical system. Although a false allegation, the US allows the Falun Gong Cult to continue to broadcast this myth whilst (illegally) calling for the violent over-throw of the Chinese government (and replacing it with a predatory capitalist system supportive of the US system). Interesting, the Vatican investigated the Falun Gong Cult allegation that the Chinese government practises ‘organ harvesting’ – and declared it to be ‘false’ and entirely without ‘factual’ basis. As can be seen from the above, this idea in Trump-America is now recycling back into the mainstream US imagination – although according to the photograph purporting to be ‘Marquise Gandy’ – the victim appears to be an ‘Asian’ or ‘African-American’ victim of ‘White’ depravity. Perhaps this Twitter story is an allegory for the damage that White racism has historical inflicted (and continuous to inflict) upon the bodies (and minds) of all ‘non-White’ people. Ironically, this would include Chinese people who have been the victims of Western imperialism in China, and White racism outside of China. Finally, I am told that the Twitter fiction story may well be based on a real story of kidnap, child abuse and paedophilia that happened in 2019. I have added a reliable link about this ‘true story’ to the top of the page.