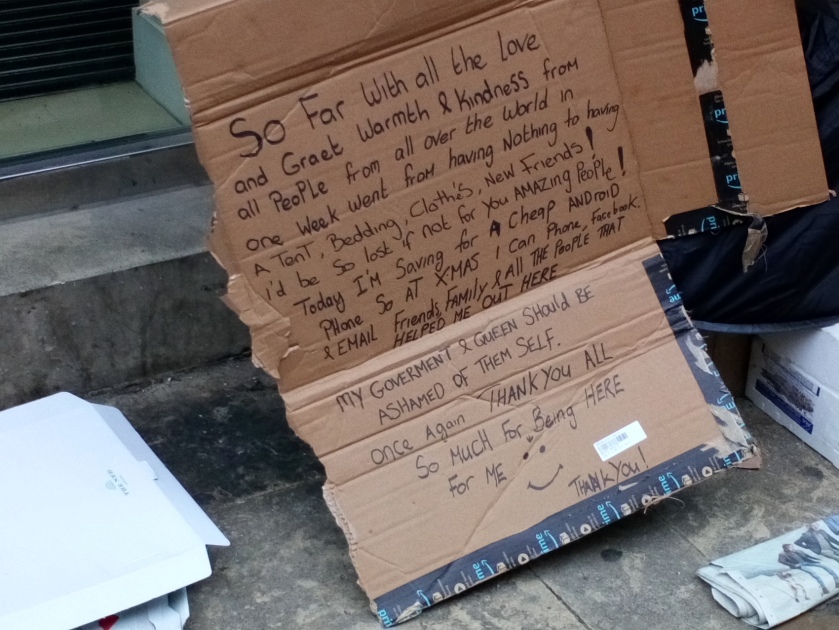 Barclays Bank is part of the capitalist system that destroyed the world-wide economy between 2007-2010 – and which from 2010-2017 has been used to justify the Tory (and LibDems) ‘Austerity’ policy. This ‘Austerity” policy has been a whole-sale attack upon the British working class and ‘Socialised’ institutions built-up over decades by British tax-payers. This has seen the privatisation of the National Health Service (NHS), and the dismantling of the British Welfare State. Social Services have been cut, and over-all it is believed that 120,000 British people have starved to death, frozen to death, or died of medical negligence.

Of this amount, at least 10,000 disabled people within UK society have died between 2010-2017. In fact, so callous have the Tories (and LibDems) been, that in 2016, the UK was found Guilty of Crimes Against Humanity following an indepth investigation by the United Nations (UN) – prompting the resignation of Ian Duncan Smith – the arch-Tory responsible for all the Welfare Reforms. The greedy banks that caused all this suffering have not been punished (other than in Iceland), but have rather been rewarded by having their loses met with taxpayer’s money – which has been re-directed away from the NHS and the Welfare State. This ‘Austerity’ policy has virtually finished-off ‘Social Housing’, and the implementation of the hideous ‘Universal Credit’ has led to an upsurge in food banks and those living homeless on the streets. In London, the Tories had ordered the police to continuously ‘move on’ the homeless out of the sight of tourists and the well to do, but there are so many homeless now, that the London police have given-up this policy. There is simply nowhere to move these unfortunate people to.

In Greek Street, opposite a Christian building once used to administer alms to the poor, (but which now has a sign stating ‘no help for the destitute’), homeless can be found spread around doorways, side streets and anywhere they are shielded (at least in-part) from the freezing weather. Daniel’s set-up of a tent and hand-written signs caught my eye – that and the fact that in minus 2 temperature he was stood on the concrete pavement not wearing any shoes or socks. Considering his situation I found him to be a gentleman. He was polite, caring and concerned about us – when we were busy muttering platitudes. I asked about his socks and he explained that he had given his socks to another homeless person who was colder than he was.

He asked me whether we were Socialists or Communists – and we said ‘yes’ to both. He then explained that homeless people in that area were trying to help one another and the ‘homed’ community by ‘sharing’ everything they had with one another. He then gave Mei-An (our eldest daughter) a lolli-pop and Kai-Lin (our youngest daughter) a packet of biscuits. This man with nothing on his feet, a former soldier in the British Army and a person betrayed by the country he has served and had risked his life for, actually asked if we ‘were’ cold. 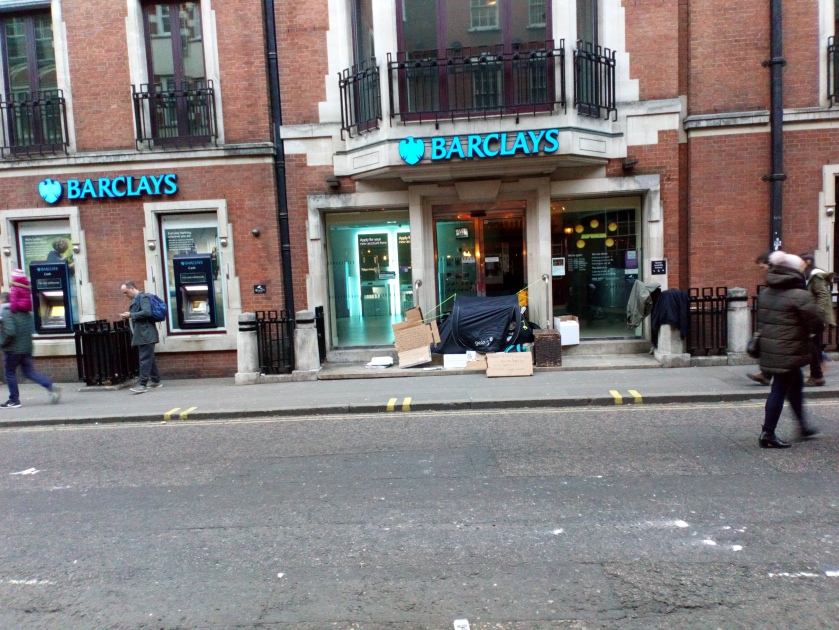