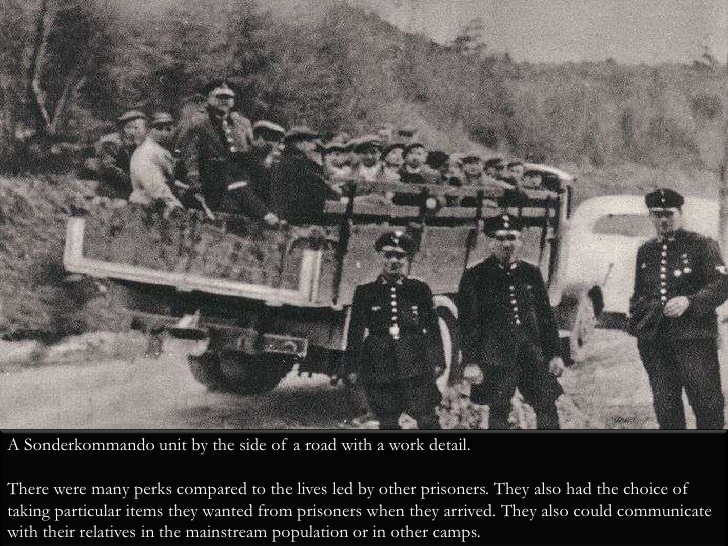 The Nazi Germans used ‘Sonder Kommando’ Units in their death camps. Usually, these ‘Units’ were comprised of collaborating Polish Jews and they assisted in every part of the extermination process – from arrival to the dead bodies being burnt. Churchill had encouraged a rightwing Polish government in exile in London – which was not concerned about the deportation from Poland of Jews, gays or the disabled – but took exception to Germans running their country! The real Polish government, however, was Socialist and living in exile in the USSR – assisting in the raising and training of Polish volunteer military units to assist the Red Army’s fight against Nazi Germany. However, when the Polish Jews rose-up in the Warsaw Ghetto in 1943 – Churchill (and the rightwing Polish government in London) refused to support them, because it was felt that Jews were not Polish, and prone to holding leftwing viewpoints. Churchill let the Jewish uprising be destroyed by the Nazi Germans – but he did work on a new plan that involved the ethnic Poles rising-up in Warsaw (a year later), in an attempt to quickly get the rightwing Polish government in London back into power in Poland BEFORE the Soviet Red Army arrived on the scene! Churchill viewed this gambit as a means to prevent a Socialist government in Poland. This plan failed when the Nazi Germans quickly put-down this new threat before the Soviets could fight their way into the city. As matters transpired, it was the Soviet Red Army that eventually fought its way into Warsaw – freed the Jews, freed the Polish people in general, and installed a Socialist Polish government. However, racism has always been a problem in Poland – particularly anti-Semitism, but also anti-Slavic (i.e. ‘anti-Russian’) prejudice. This situation led to a permanent rightwing resistance to ‘Socialism’ that exists in Poland to this day (alongside the usual racist attitudes). Today, the modern Polish State plays-down the Jewish Warsaw Ghetto Uprising of 1943, but eulogises the Warsaw Uprising of 1944 – whilst simultaneously demonising their eventual liberators – the Soviet Red Army!