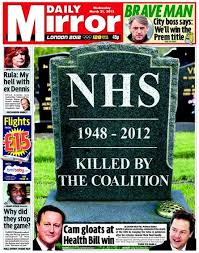 As and when I am made aware of NHS privatisation practises in Sutton (South London) – as experienced primarily through the Robinhood Lane NHS surgery, I am recording this information on this blog so that my descendants know what the NHS was, and how it was destroyed by the European Union (EU) through the destructive policies of New Labour, the Tories and the LibDems – all the institutions of which have blood on their hands.  Recently, a child under four years of age, who has been hospitalised in the past for infant pneumonia, and who has more or less continuous chest infections, was taken to Robinhood Lane NHS surgery by her mother.  The mother asked the NHS doctor if her daughter could be referred to a Chest Consultant – and this request was immediately refused. The doctor stated that it was the Robinhood Lane NHS surgery policy to verify that each young child must have experience at least’twelve’ different illnesses (each confirmed by a doctor) over a six month time period before the surgery would ‘consider’ the possibility of referring the child to a Chest Consultant.  It beggars belief that a young child would be allowed to ‘suffer’ in this manner just so a partly privatised NHS surgery could save itself the expense of a referral. Not only this, but if a child really did contract twelve different illnesses in this timespan, it is unlikely that he or she would survive!  Doctors who get paid hundreds of thousands of pounds each year of taxpayer’s money (whilst actively co-operating with the privatisation process) should remember the cardinal rule – ‘Do no harm!’