Thousands gathered in Central London yesterday to support the people of Kobane (in Syria) and its people who are trying to defend themselves – with Kurdish help – against the Islamic extremist movement known as ISIL and ISIS.  The USA, after pursuing its policy of destabilising the legitimate regimes in the Middle East, have been slow to act in the area, as has Turkey whose anti-Kurdish racism has prevented them from assisting in a conflict that is happening just over its national borders.  People of all nationalities came together yesterday in civilised Internationalism to protest this situation that has been caused purely through the USA’s neo-colonial policies. 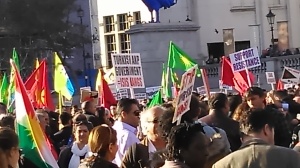 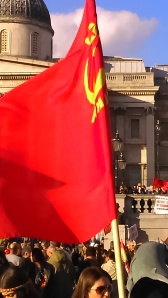