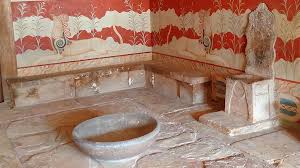 Author’s Note: The Etymology of the Greek word ‘labrys’ (λάβρυς) is believed to refer to the ‘double-bitted axe’. A number of academics believe the word ‘labyrinth’ (or ‘labyrinthos’) [Λαβύρινθος] is derived from this (Lydian) word ‘labrys’ – even though the Greek term for ‘axe’ is ‘pelekus’ (πέλεκυς). However, the time period we are dealing with is ‘ancient’ Greece and it could well be that the Minoan civilisation of Crete ‘borrowed’ this Lydian word (a language prevalent between the 8th-3rd century BCE and found in Western Anatolia or modern-day Turkey) – possibly as a status symbol. This is linked to mythical King Minos and the legend of the Minotaur (comprised of a very large, tall and muscular man’s body with a bull’s head). The point is that these myths and legends indeed developed eventually into very real (material) buildings and rituals that saw living humans made to give their lives to various unseen deities. As a consequence, those chosen for sacrifice were fed into the labyrinth underlying the palace at Cnossus during the time of the Minoan civilisation (3500-1100 BCE). Presumably, as the double-axe-head simultaneously faces two different directions – this might suggest a perpetual paradox of direction – and the often confusing dilemma of moving left and right.

‘There seems to be no evidence that there were public temples in the Crete of this period. [The sacred places were in caves and on the peaks of certain mountains. Here the people brought offerings and celebrated some form of public cult; but there were also domestic sanctuaries in palaces and private houses. Religion centred round the forces of nature and nature-daemons in the form of animals are often represented by the Cretan artist. The chief divinity seems to have been a mature-goddess, mistress of animals, who is sometimes represented as guarded by lions, sometimes associated with doves, who symbolised the descent of a deity; she was served by priestesses.] She was closely connected with a male divinity, whether her consort or her son, who seems to have been subordinate to her. In later times the Greeks conceived this god as Zeus, son of Rhea and nurtured in the Idaean cave. Both the goddess and god were associated with the double-axe, a fetish in which the deity was supposed to dwell. We find the same worship of the double-axe in western Asia Minor among the Carians. This symbol was so frequently represented on the walls of the Cnossian palace that it might almost be called the palace of the double-axe; and, as the Carian name for the double-axe was labrys, it has been suggested that the palace was known as the labryrinthos. This would explain the origin of the curious Greek legend that Minos, King of Cnossus, kept in a labyrinth the monstrous Minotaur who devoured the tribute of youths and virgins brought from overseas. The intricate plan of the palace might well suggest a maze.’

JB Dury: A History of Greece yo the Death of Alexander the Great, MacMillan, (1952), Page 19 (Chapter 1 – The Beginnings of Greece and the Heroic Age)