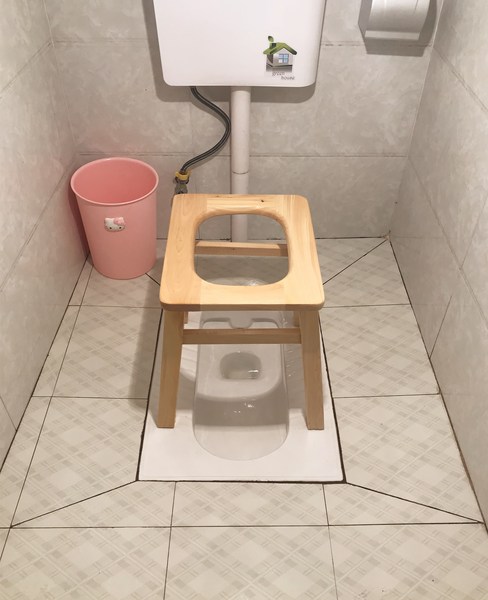 My Chinese family are Hakka Chinese from the Sai Kung area of the New Territories (Hong Kong). Although the Hakka language includes many Northern words and phrases (similar to Putongua) – those ‘Hakka’ (or ‘Guest Families’) now living within Southern China also routinely borrow words and phrases from the Cantonese language (Guangdonghua) which is spoken by the majority of surrounding people, etc. What this amounts to is that the same (Chinese-language) ideograms are often pronounced in different ways throughout China – depending upon the varying linguistic and ethnic groups. Within Northern China, for instance, our family name of ‘Chan’ (陳) is pronounced ‘Chen’, whilst in Fulian province it is pronounced ‘Tan’, etc. Within the province of Guangdong, it is pronounced ‘Chan’. A phrase we often use to indicate the ‘toilet’ in everyday conversation is ‘廁所’ (Ce4Suo3), or ‘Chi-Saw’ in Guangdonghua (i.e., ‘Cantonese’).

As my eldest daughter – Mei-An – asked me what it means, I have decided to unravel the meaning of these ideograms. As a child I was told ‘Chi-Saw’ referred to a ‘Water House’ within which a person went ‘toilet’. It seems that this is a very old Chinese invention that involved a stone house built outside which possessed a constantly flowing (natural) source of water running through a channel dug into the floor. As a stream used for all kinds of human activity, the toilet would be the last place in the village the water ran through – often engineered to pour-out down a cliff-side or similar safe place. The ancient Chinese understood that toilet-waste was dangerous to public health and should be diverted out of the general water supply as quickly as possible. I would suggest that this suggest a very advanced understanding of health, hygiene and disease communicability. Whatever the case, the two ideograms – ‘廁所’ – appear to be very old in structure.

The ideogram ‘廁’ (Ce4) is comprised of the left-hand particle ‘广’ (guang4), which means ‘broad’, ‘wide’ or ‘extensive’. It can also refer to an object that is widespread and used by everyone. However, there is a much older definition for this particle which suggests that a small building resides on the edge of a cliff. This might be suggestive of where the first toilets were constructed with their backs to cliff-drop and the entrance facing in-land. The toilet waste may well have been tipped down the cliff away from any human settlement – perhaps to some kind of cesspit (to be later used to fertilize the ground for farming). The right-hand particle is ‘則’ (ze2) – which is constructed of a left and right sub-particle. The left-hand sub-particle is ‘貝’ (bei4). This can be interpreted in two ways: 1) The first refers to ‘貝’ (bei4) meaning a ‘cowry’ or ‘decorative’ sea-snail shell prevalent on the shores of Southeast China – but not found in other areas. This shell was used as an early form of ‘money’ and of decoration to demonstrate social status. These ‘cowry’ shells were collected on the shores of Southeast China and imported into Central China by the ruling Dynasties to act as a form of currency.

This could indicate that the structured toilet building was first conceived, built and used – with the sewage being washed into the sea. 2) The sub-particle ‘貝’ (bei4) is believed to be a shortened form of ‘鼎’ (ding3). In the ‘Classic of Change’ (Yijing), this refers to Hexagram 50 (䷱). This is the very important vessel of ‘sacrifice’ prevalent within ancient China. This is the bronze cauldron (covered in ideograms and symbols) which was used for cooking and for divination rituals. As overtime the original meaning or intention of the founding scholars often become ‘unclear’, we must carefully separate all the parts and deeply contemplate their hidden meanings. The right-hand particle of ‘廁’ (Ce4) is ‘刂’ (dao1) – a contraction of ‘刀’. This is a ‘blade’ or perhaps a ‘broad-sword’. The knife cuts food in preparation for cooking, and cuts the yarrow-stalks for divination purposes, etc. Food is also divided for sharing once cooked. On occasion, sometimes animals were sacrificed whilst prisoners of war were executed. Of course, all these practices were not carried-out at the same time or in the same place, and certainly did not use the same implements, etc. This would suggest ‘another worldly’ origin, or at least a ‘divine inspiration’ behind the hygienic collection and disposal of human waste.

The ideogram ‘所’ (suo3) is comprised of left-hand particle of ‘戶’ (hu4) which represents a ‘door’, ‘opening’ or ‘entrance’. In very old texts it might also be used to denote a ‘face’. Contextually, this particle can refer to a ‘household’ or group of people that live in a single settlement. Such a household is bound together by a single surname. Such a family is held together by the traditions of their lineage which record and pass-on all their combined knowledge, experience and achievements. The rules of behaviour that one follows – they all follow. Whatever technology and methods of survival the household possesses – all are subject to its benefit and subject to its protection. The right-hand particle is ‘斤’ (jin1) which is an exact depiction of an ‘axe’. A ‘Jin’ (or ‘catty’) is a traditional unit of weight within Mainland China equal to 0.5 kilograms – although in Hong Kong the equivalent is the ‘Kan’ (possibly of Dutch origin) which equals ‘0.60478982 kilograms’, etc. It would seem that the ‘axe’ is used to ‘portion’ certain things into more or less exact quantities. This is the practice of generating relatively ‘small’ packages of goods that are roughly the same size and shape. Although referring to village life and the exchange of goods (and measures of goods) at the local market – this might be a very polite way of referring to the human need to daily pass bodily waste in the toilet – a habit as important as buying fresh food at the market!

Within imperial China, the family unit (and the clan) was a microcosmic reflection of the imperial house. Chinese culture was premised upon the absolute replication of order from top to bottom wit difference allowed anywhere. Each clan was self-sufficient and did not recognize the worth or authority of any other. Even the Emperor had no direct power in the villages of a clan, and his Messenger would have to stop at the village gate as he had no right to enter. The clan leadership was an inherited position that could only be changed through force of arms. If the Imperial House decreed the implementation of a special device used to regulate and control the function of human excrement – then such an invention would be considered a ‘gift’ from the emperor to every name-clan throughout China! There could be no refusal without punishment and so the new device would have to be carefully constructed – probably as a small stone building on the edge of a cliff – with a small stream running through and over the edge of cliff. This device possessed a door at the front through which people entered and left. It could be that when ‘empty’ an axe was placed outside up against the door for all to see – but when ‘occupied’ the axe would be inside the toilet with the user. The axe was both an indicator of use and a means for the occupant to protect themselves.