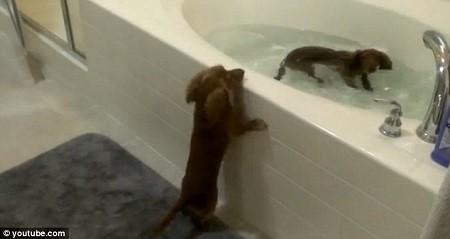 Scientists confirmed today that dogs with long heads invariably possess short legs – and that this new finding could fundamentally revolutionise the manner in which cat-flap manufacturers perceive dogs and consider environmental design. ‘A sample of ten thousand dogs was selected at random’ – explained Geriant Jeffries – the scientific head of the research project (entitled ‘Every Dog Has a Tale To Tell’) who continued ‘We then extracted all the dogs with short heads and long-legs from consideration – and were left with the inevitable result of the experiment.’ A number of Cat Charities, however, have expressed concern that private companies might be taking advantage of the Covid19 Pandemic and using the emergency to ‘genetically modify’ dogs with the intention of slowly replacing the cat population. On the more extreme ‘fringe’ of this notion is a QAnon conspiracy linking Donald Trump’s toupee with allegations that it is made out of ‘real’ cat-fur! The thinking behind this is that if Trump supporters could remove all evidence of cats ever existing (and replace them with lookalike dogs) they would simultaneously be demonstrating their ‘loyalty’ and potentially saving Trump from yet another threat of serving a prison sentence! When asked to comment about this theory, Geriant Jeffries advised ‘I am told that in Myanmar, the cruel Burmese are literally attempting to ‘ram’ dogs that are obviously ‘too big’ through cat-flaps that are too small! This demonstrates that there are genuine scientific causes out there in the real world that eclipse any absurd notions involving the lunacy of Donald Trump’s wig!’ Updates will be posted when they become available.