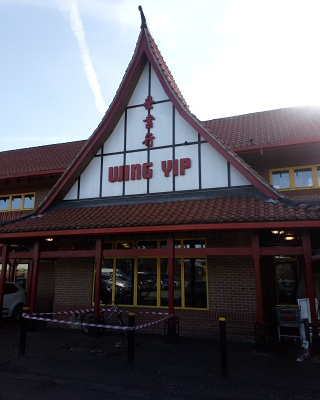 As an Anglo-Chinese family living in Sutton – Southwest London – we used to frequent the Tai Tung Restaurant nearly every weekend when the older relatives were alive, but this activity lessened around 2008, when the prices were doubled overnight, and the portions halved. It made much better economic sense to catch the Tube to Leicester Square (a journey free of the traffic congestion in and around the Croydon area), and eat in a cheap and well run Yun Cha (Dim Sum) restaurant in Gerrard Street (i.e. London’s Chinatown. We had not visited the Wing Yip Supermarket in Purley Way for around ten years, but today, my partner Gee and myself, decided to take our two young daughters to experience the local Chinese community. Bear in mind that for over a decade we have been socializing with Mainland Chinese people from Communist China, and had gotten used to their modern and civilised attitudes. Thinking back, we used to eat in the Tai Tung Restaurant (situated within the Wing Yip complex in Purley Way) in large groups of extended family members. We even took my mother – Diane Wyles – there when she was visiting from Devon around 2001, but I do remember certain issues. Once, whilst waiting for a table to take our Chinese grandmother for a meal, it took over two hours to be seated. Another time, we were seated in the restaurant and were not approached by a waitress for over 45 minutes – and then it was to be asked whether we wanted our bill!

The Wing Yip family are very successful members of the British Chinese community, and they cannot be faulted for their hard-work and dedication. They are British citizens and unlike many corporations in the UK – Wing Yip actually pays its fair share of tax. They also originate from a Hong Kong that was a British imperialist colony. Up until 1997, this part of China had been more or less immune from the Socialist transformation that occurred on the Mainland from 1949 onwards. These Chinese people were subjected to a brutal British colonial administration that made it clear that Whites were superior to Chinese, but that Chinese were better than Asians or Africans, etc. For many from the older generations in Hong Kong, it was taught that the only way to survive was by conforming to, and accepting this British imperialist attitude of racial discrimination. What this has meant for pockets of Chinese people from the old Hong Kong, is that these outdated attitudes are applied in an inverse manner in the UK. The manager of the Tai Tung Restaurant practises these discriminative attitudes when allotting tables to queuing members of the public, during times of high density eating. Our experience today serves to confirm what others have told me in the past, but which I was not paying attention to prior 2008.

This is how British colonial attitudes are applied at the Tai Tung Restaurant:

Furthermore, Wing Yip has provided in the past small bursaries for British born Chinese people, but on the application form, the applicant must provide proof that they are ‘ethnic Chinese’, and that neither of their parents are of ‘non-Chinese’ origin. As far as I am aware, this is ‘illegal’ in the UK under racial discrimination laws. When we arrived at Wing Yip today (to celebrate Chinese New Year), we received number ’55’ and joined to queue of around ten people who were waiting. Soon about another 20 odd people arrived and numbers were being given-out into the 70’s. however, after waiting 30 minutes, we noticed that the group of people around us (all mixed ethnicity families involving an ethnic Chinese partner and a Black, Asian or White partner and children) were being ignored, and instead people who had just arrived holding numbers like ’68’, ’71’ and ’75’, etc, were being called in front of use because a) they were ethnic Chinese, and b) know the owner! Our group started to complain about what was happening in front of our eyes, only to be told the ‘right kind of table’ is not ready. Most of the mixed ethnicity groups involved families of four members – and yet groups of four were being allowed in who had only just arrived!  This is a sickening display on two counts. 1) ethnic Chinese people should know better than to racially discriminate in the UK, and 2) what we are seeing here is British colonial rule being applied to Hong Kong businesses in the UK. I would suggest boycotting Wing Yip and spending your money elsewhere. Gerrard Street has many wonderful eateries that have well-mannered staff and reasonably priced food, but having said this, there are now many very good Mainland Chinese restaurants all over the UK. The Tai Tung Restaurant in Wing Yip (Purely Way) brings shame down upon the Chinese people, and insults all those people of other ethnicities who would otherwise like to interact with ethnic Chinese people.