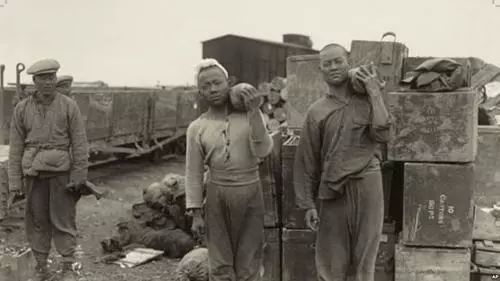 The Aliens Restriction Act (Amendment) Act 1919 – was an extension of the 1914 Aliens Restriction Act – which was designed to limit ‘enemy’ aliens entering or travelling through the UK during WWI. Although thousands of Chinese men were brought to the UK to assist the British Army in France, (where they served as unarmed labourers both behind and in the frontlines), the British government deliberately used the Aliens Restriction Act (Amendment) Act 1919 to expel around 20,000 Chinese people from the UK in 1919. What were once ‘Allies’ of the UK became – with the flick of a pen – ‘alien’ intruders. During December 1918, the General Election in post-WWI Britain brought David Lloyd George and his Coalition Government (between Liberals and Conservatives) to power. In January 1919, Winston Churchill was appointed Secretary of State for War and Secretary of State for Air. Although responsible for the demobilisation of the enlarged wartime British Army serving in France, his influence in all aspects of domestic British government was substantial. He used his authority to order the British Army to break strikes and quell all working-class protest and descent. Meanwhile, on June 3rd, 1919, the official first large-scale strike occurred in Shanghai China, whereby at least 70,000 Chinese workers in more than 50 enterprises (including Textile, Machinery, Railway, Automobile, Ferry, and Ironworks, etc) organised themselves into strong Unions and took to the streets in protest. This unprecedented action permeated throughout the Chinese diaspora, where for the first-time overseas Chinese people started rebelling against Western racist attitudes, and terrible working conditions. Although there was a strong sense of nationalism and xenophobia in the UK immediately following victory in WWI, the British Government’s attention was drawn to the British Chinese population primarily through its agitation and strike action. This was happening at a time when workers throughout the UK were also rising-up. Far from making a ‘land fit for heroes’, the British Government wanted to prevent at all costs a Bolshevik-style Revolution in the UK, and certainly was not inclined to sit back and watch migrant Chinese workers unite with British workers and overthrow the capitalist State. Churchill, as the effective head of the British military, ordered British troops to clear-out Chinese migrant settlements (at bayonet point) particularly around the Liverpool area. Around 20,000 Chinese people were forced onto ships and deported back to China. The situation in the UK was exasperated by the fact that Lenin in Revolutionary Russia had issued a decree on June 25th, in the name of the Chinese people, stating that all ‘unequal’ and ‘imperialistic’ treaties between Czarist Russia and China were now null and void, and he encouraged the Chinese people to ‘rise-up’ against colonialism, imperialism and capitalism – stating that Soviet Russia will support a ‘Communist’ China. In the meantime, the British Army had been ordered into Revolutionary Russia in 1918, and was still attempting to destroy the Russian Revolution when Churchill took hold of the reins. This foreign intervention would be defeated by the Bolsheviks in 1921, but by this time the British Chinese population had already been deported and was a distant memory. Chinese people continued to live in the UK, but at drastically reduced numbers (in the 1921 Census, there were just under 2,500 Chinese people still living in the UK). What I find interesting is how a contemporary British Chinese population (that views itself as ‘middle class’), plays down the obvious British racism aimed at the early Chinese settlers in the UK, whilst also writing out of any narrative histories the impact of ‘Socialism’ upon the Chinese community. Ironically, due to British racist attitudes, those Chinese people who think they are ‘middle class’, exist within a cultural vacuum due to the ‘exclusion’ they suffer from the White middle class they strive to emulate. The White middle class does not recognise or accept any other version of bourgeois existence as being on an equal footing with their own. Therefore, those Chinese people who have made money and secured a good job tend to relate to the very conservative attitudes their White colleagues hold, which paradoxically serve as the basis for racial exclusion. Therefore, middle class Chinese people navigate British society through the agency of affluence, which entails an adopting of an antagonistic attitude toward Mainland (Communist) China, whilst simultaneously denying the reality (and existence) of the Eurocentric racism they a priori experience everyday. I draw a distinction between ‘middle class’ Chinese people (who possess a privileged access to media, education and political influence), and the masses of Chinese people in the UK who are ordinary workers who often pursue Union membership and collective bargaining. The story of the ordinary Chinese worker is often obscured due to their general lack of access to the middle class establishment. Whereas middle class British Chinese people look to the ‘White’ British establishment for their sustenance, invariably the down-trodden and oppressed Chinese workers often instinctively look toward Communist China for ideological support.