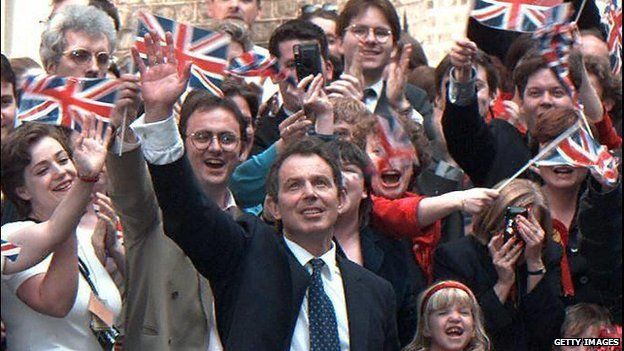 Although not ‘Communist’ in any obvious sense, the 1945 Labour Government ‘borrowed’ Lenin’s idea of a Welfare State and fully comprehensive National Health System BEFORE the US Truman Doctrine and Marshall Plan could be fully implemented n the UK. The US war-mongers had to wait for the election of Winston Churchill in 1951, for their idea of getting rid of the Welfare State and NHS could be enacted – but only then – it was exclusively applied by Tory Governments – until the election of Tony Blair’s ‘New’ Labour Party in 1997 that is. One of the first victims of ‘New’ Labour was Britain’s disabled population who were immediately targeted for ‘benefit cuts’ (this was primarily through stopping ‘Disability Living Allowance’ payments). This followed Tony Blair reneging upon his (pre-election) promise of ‘Civil Rights’ for disabled people. This infuriated the British business sector which did not want to be legally forced to make their work-places ‘accessible’ to ALL disabled people. The notion of disability ‘Civil Rights’ was used by Tony Blair to attract the disabled vote for the ‘New’ Labour victory, but when he backtracked and disabled protestors ‘chained’ themselves to railings outside Downing Street (and elsewhere) – Tony Blair unleashed the police upon them.

Disabled activists were verbally and physically abused, assaulted, beaten, arrested, and charged with various offences. The BBC and ITV covered this spectacle as if the protests were ‘criminal’ and disabled people were the ‘enemy within’. In the meantime, the Unions remained oddly ‘quiet’ about it all, and did not offer the usual ‘Solidarity’ (even in principle) to the disabled protestors. This was because many on the bourgeois left could not (or would not) acknowledge the rightwing nature of ‘New’ Labour policy. What it all comes down to, is the mistaken notion that ‘civil rights’ for Britain’s disabled population is ‘non-profitable’ for big business. It is perceived as an ‘added’ and ‘not required’ expense, that does not produce any obvious pay-back for the investment. Disabled people are perceived as ‘invalid’ or as possessing ‘no inherent value’ within the labour market or work environment. As a consequence, this unquestioned prejudice permanently excludes the UK’s disabled population from the dignity of employment (regardless of the fact that a small minority of people with disabilities are employed). The current Tory policy of simply cutting benefits and leaving disabled people with no financial support in a highly discriminative working environment, does not ‘force’ people with disabilities into employment – simply because no such ‘suitable’ work environments exist, just as long as employers are not legally obliged to provide them.

This ‘indifferent’ policy (devised by the Tory-LibDems Coalition Government 2010-2015), has led to the deaths of thousands of disabled people, whose impairments, disorders and injuries cover a very wide scale of special needs and support. This explains why the United Nations (UN) in 2016 has found the Tory-LibDems Coalition Government 2010-2015 ‘Guilty of Crimes Against Humanity’, for the deaths of at least 10,000 disabled people, noting that the British media behaved over this time, in a manner reminiscent of that of rightwing atmosphere of 1930’s Berlin, and the unquestioned German media support of the rise of Adolf Hitler. It is ironic to consider that the 1945 Labour Party’s apparent concern for people with disabilities stemmed not from an understanding (or even ‘caring’) about people ‘born’ with disabilities, who were locked away in back rooms by families made to feel a sense of ‘shame’ about their presence, or equally locked in faceless State-run ‘Institutions – from which there was no release, but rather upon a concern for returning ‘wounded’ men who had fought in the British Armed Forces during WWII. Those ‘born’ with disabilities inadvertently benefitted from a Welfare State not necessarily ‘designed’ to assist them in anyway.