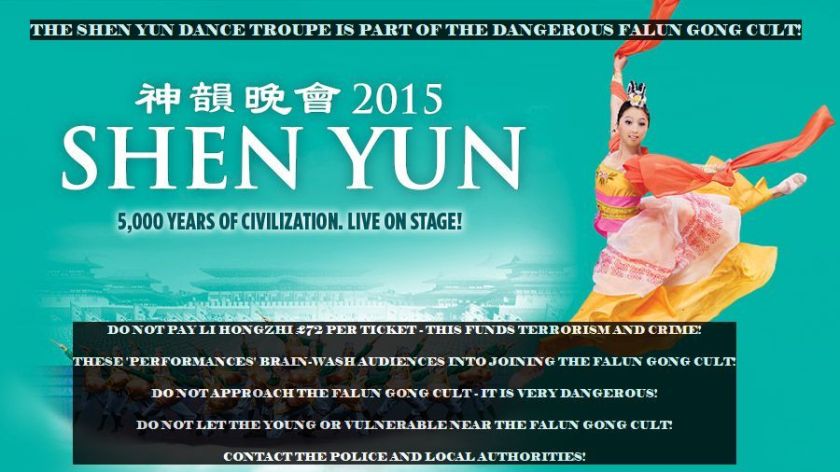 The ‘Shen Yun Dance Troupe’ is stated by members of the Chinese diaspora, who have fallen victim to the dangerous (and ‘illegal’) Falun Gong Cult. Sometimes Western victims of the Falun Gong Cult take to the stage ‘yellowed-up’, and made to look ‘Chinese’, but in a manner that firmly resembles ‘Fu Manchu’ and other Western racist stereotypes. This should not be surprising, as the ‘Shen Yun’ was founded in the home of the Falun Gong Cult – namely the USA – and embodies all the Eurocentric prejudices and racist attitudes typical of the imperial era. In fact, all the movements are superficial and Western in appearance, despite the Falun Gong Cult claiming to be reviving ‘5000 years’ of Chinese tradition. This is absurd, as China around 3000 BCE was neolithic and virtually nothing of that culture has existed for thousands of years! What is being seen in the ‘Shen Yun’ performances is the Western mimicry of Chinese culture. The US Authorities got the idea for a visually stunning spectacle from the very successful (and authentic) ‘River Dance’ of Ireland, which has been very successful in China. As with everything ‘Falun Gong Cult’, the ‘Shen Yun’ exists to continue the US attack on Communist China, whilst claiming to have nothing to do with the dispute.

As a life-long practitioner of traditional Chinese martial arts, I know that the movements in the ‘Shen Yun’ performances are not a) ‘Chinese’, and b) ‘martial’. These movements have derived from Western dance, and there is nothing traditionally ‘Chinese’ about any of it. Whilst watch a ‘Hey Douggie’ video with my young children today, half-way through an episode of this cartoon, an advertisement of ‘Shen Yun’ suddenly appeared on the screen – suggesting that Youtube encourages the ‘illegal’ Falun Gong Cult. This should not be surprising, as Youtube is a US commercial venture that follows the peculiarities of US foreign policy. What is particularly disturbing is to see various Western people in the audience often giving eulogizing interviews about the ‘Shen Yun’ performances – obviously repeating well-practised and rehearsing scripts premised upon Falun Gong cult propaganda.

The Chinese ideograms for ‘Shen Yun’ are ‘神韻’ which the Falun Gong Cult states means ‘the beauty of divine beings dancing’. This is incorrect, as ‘神’ (shen2) means ‘god’, ‘spirit’, ‘divine’ and wondrous, etc, whilst ‘韻’ (yun4) refers to rhymes, harmony of sound, refined and sophisticated, etc. When found together, the Chinese dictionaries suggest that they refer to the ‘flavour of a poem or painting’. Shen Yun, as an expression of the divine, can also mean ‘charm’, and refer to manipulation of a population through divine interference. This is exactly the designed function of the Shen Yun Dance troupe. Unsuspecting audience are ‘brain-washed’ into becoming involved in the illegal activities of the dangerous Falun Gong Cult, and to accept the bizarre teachings of Li Hongzhi with an uncritical mind-set. The Shen Yun Dance Troupe believe that they are ‘channelling’ the divine essence of Li Hongzhi, when in reality all they are doing is misrepresenting traditional and contemporary Chinese culture.