We, as a progressive family with a history of Revolutionary activity, fully support the right of all oppressed peoples to rise-up and protest the conditions of that oppression.  In this regard, we support all women in every action of Resistance and Revolution. Women have an absolute right to expose and deconstruct the patriarchalism they suffer under, and to over—throw those who oppress them. This applies to every class of woman, and to every nation of women around the world. We particularly care about working class women who struggle every single day with bad housing, bad healthcare, an abusive Welfare System, and often abusive partners. There is also the issue of women who suffer all these things, whilst possessing a disability. These women do not possess the advantages and privileges of middle class women, and of course, Black and Asian women experience the oppression of racism on top of all the other hardship. There is also the threat of child abuse against young girls, and sexual violence and rape against women. All these things we condemn and strive to over-throw – this is why both myself and my partner Gee got our four-month old daughter (Kai-Lin) and our five year old daughter (Mei-An) ready for an expedition to Central London whilst the temperature was minus 2 degrees outside, and ice lay across the pavements!  We are glad that so many people found it in their hearts to protest against fascism, but as Marxist dialectics requires refinement through criticism and analysis, I will list various other issues below. 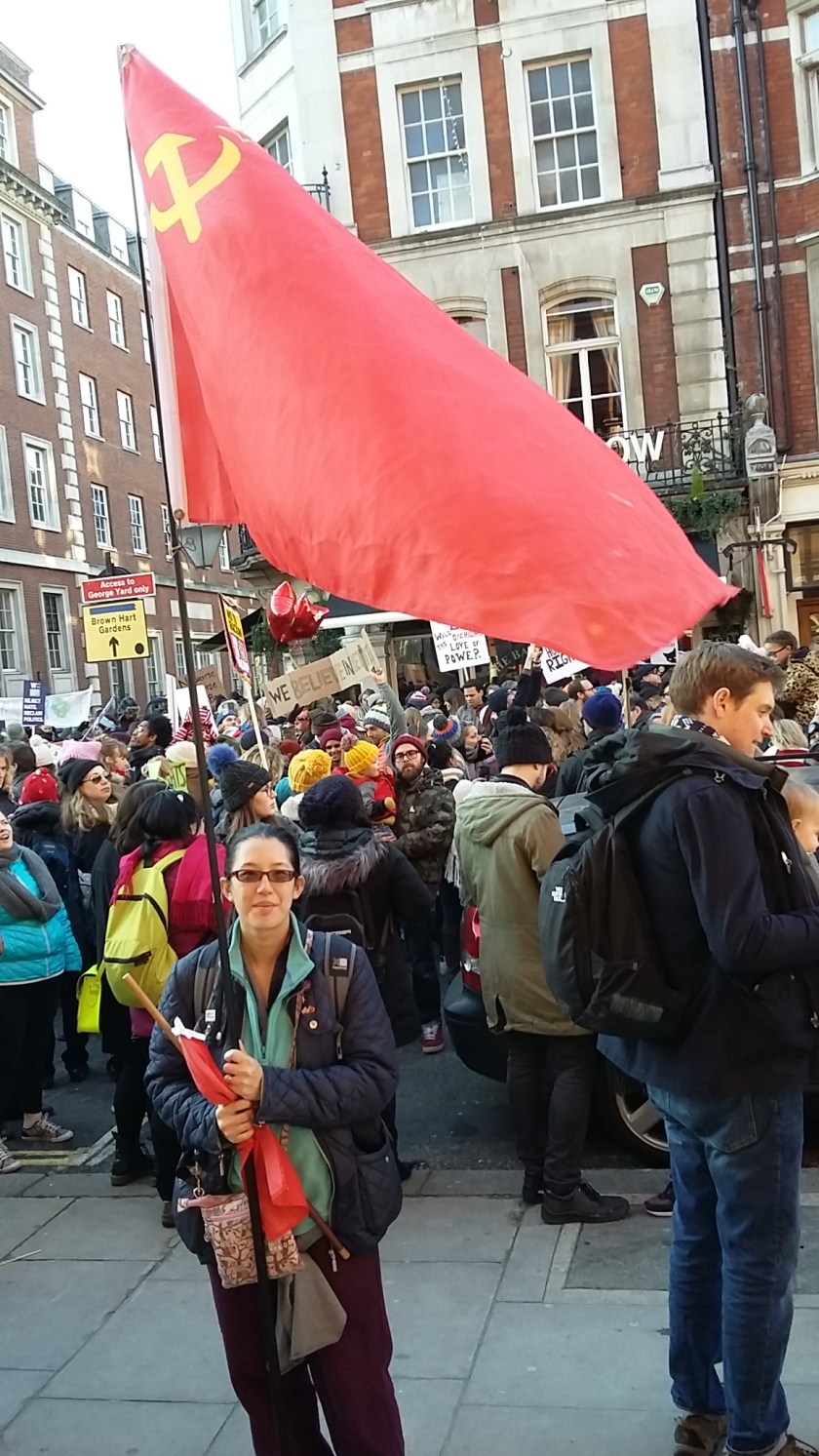 As Members of the Communist Party of Britain (CPB) – Croydon Branch, we attended the Women’s March on London today. The March, arranged by women for women – but including all those that support Women’s Rights – was scheduled to leave Grosvenor Square (near Bond Street Tube Exit) at 12:30pm, with everyone being told to meet at 12:00pm (the March was to end at Trafalgar Square at 2:00pm – with speeches until 3:300pm). Having spent years marching through London on leftwing marches, this sounded odd to me – as if the organisers had little or no experience of arranging marches in London, and did not know what to expect.

My assumptions soon proved right.  When the leftwing arrange marches, (something they have done for hundreds of years), mass protests are arranged in parts of London such as the Embankment, where all the roads are shut and there is ample room for tens of thousands of protesters to meander their way through the capital. Things were very different today, as between eighty to one hundred thousand protesters descended on the ‘small’ and compact side-streets surrounding Grosvenor Square. Like thousands of others, we got bogged-down in one of those side streets at 11:50am – with no movement up-front. The sheer numbers of people being herded into these side-streets by stewards on the High Street created dangerous levels of congestion that got worse and worse as time ticked by. 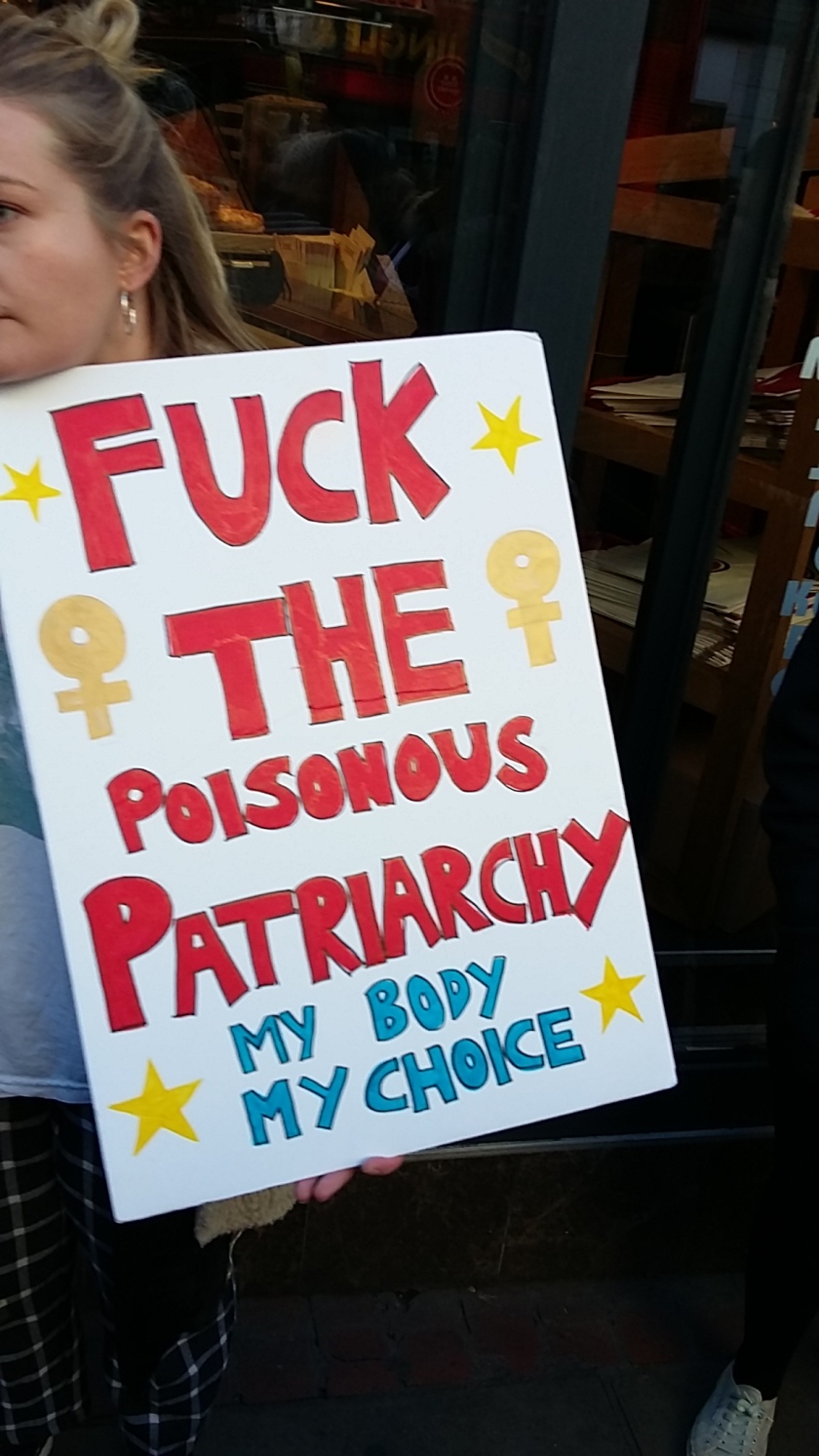 Things were so bad by 1:00pm that people started to push their way out of the crowds and fighting their way into the less congested side-streets moving away from the march. We left with a group of about twenty others – many with young children fearing for their safety in the crush. We had to circumnavigate the US Embassy along with many others – particularly after we read that thousands had arrived at the US Embassy to find no March stewards and no one apparently in charge. This had led to protesters simply sitting down and preventing the March from moving away. Frantic messages on the Women’s March on London reveal the extent of the chaos.

It must also be stated that apart from our Red Flag, there was no other obvious Socialist or Communist presence. We had hoped that other progressives would have turned-up and made their presence felt, after-all in history it has only been Marx and Engels who called for women to be free of capitalist oppression, and thereby achieve equality with men. Utopian Socialists, on the other hand, often thought that all ‘men’ should be equal, but that this did not extend to women. 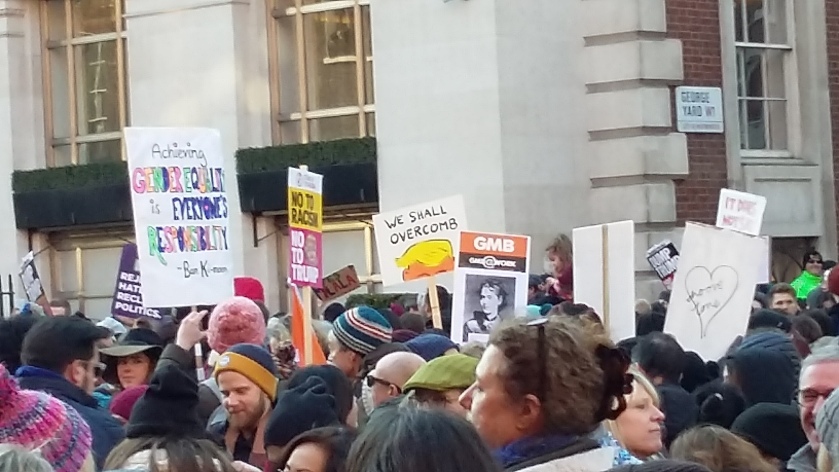 Writing on the March website over the last week or so, this doesn’t surprise as the organisers of the March appeared to have gone out of their way NOT to be associated with the Socialist or Communist left. Making Socialist posts, I get around five ‘likes’, but White middle class women making puerile comments alluding to genitalia would attract over 900 ‘likes’ in a matter of hours, and herein lies the crux of the matter. Women must free themselves – whilst working to free others from the grip of capitalism. This is true Marxist Feminism. Bourgeois Feminism is not like this. This March was essentially a Bourgeois Feminist affair, reducing women’s rights to an insular ‘single issue’, with already privileged White middle class women mistaking their privilege for ‘freedom’, and criticising working class women for being ‘lazy’, rather than being ‘oppressed’. 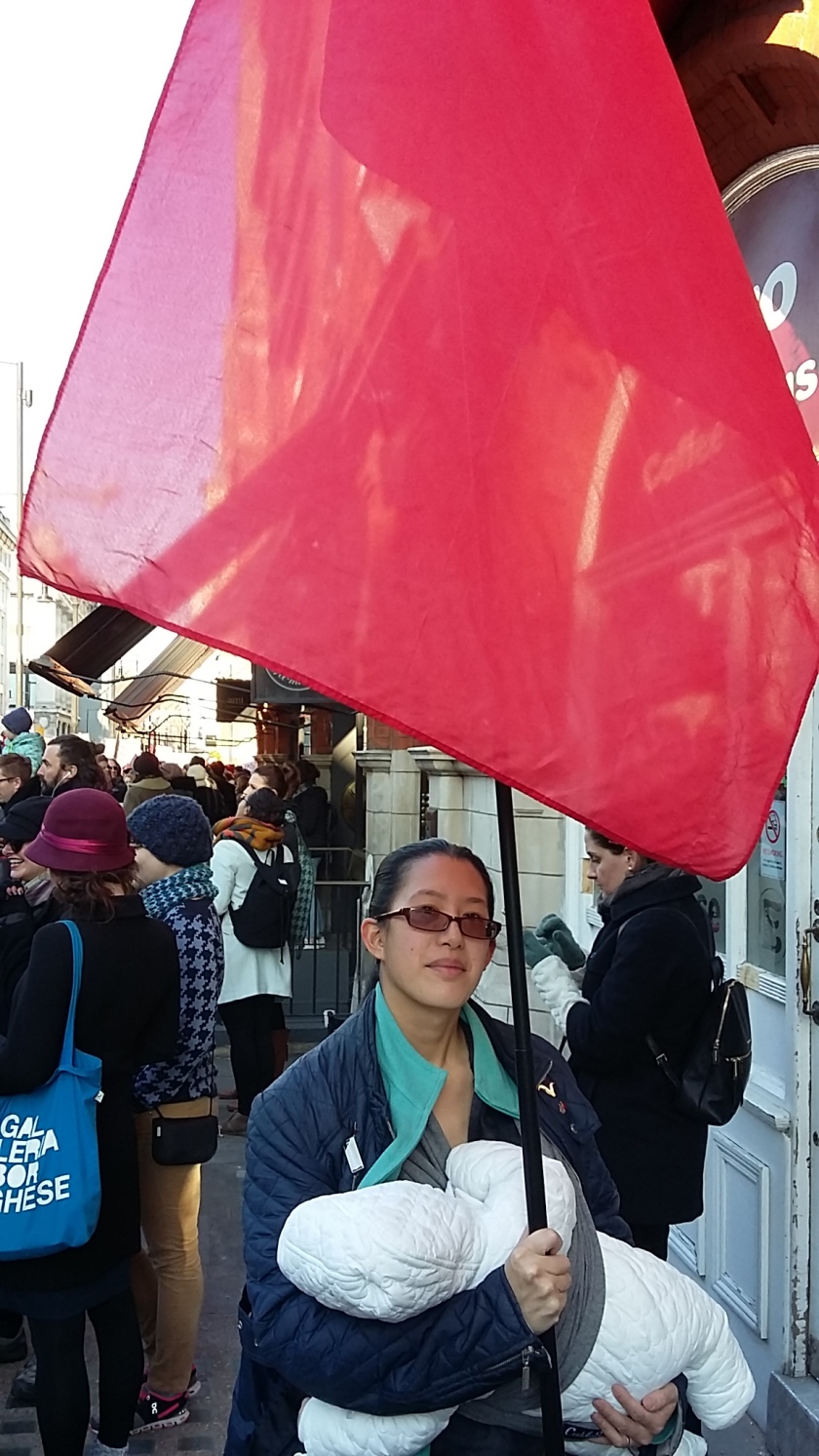 Bourgeois Feminism does not want an end to capitalism, it simply wants to reform it – amassing ‘more’ privilege in the process. It is astonishing to see that a hundred thousand British women marched because they were ‘offended’ by the latest White racist bigot elected as US President, but remain absolutely ‘silent’ about David Cameron, Nick Clegg and Theresa May, the rightwing Austerity these tyrants unleashed, the privatisation of the NHS, the dismantling of Welfare State, the dismantling of the education system, and the abolition of Social Housing. 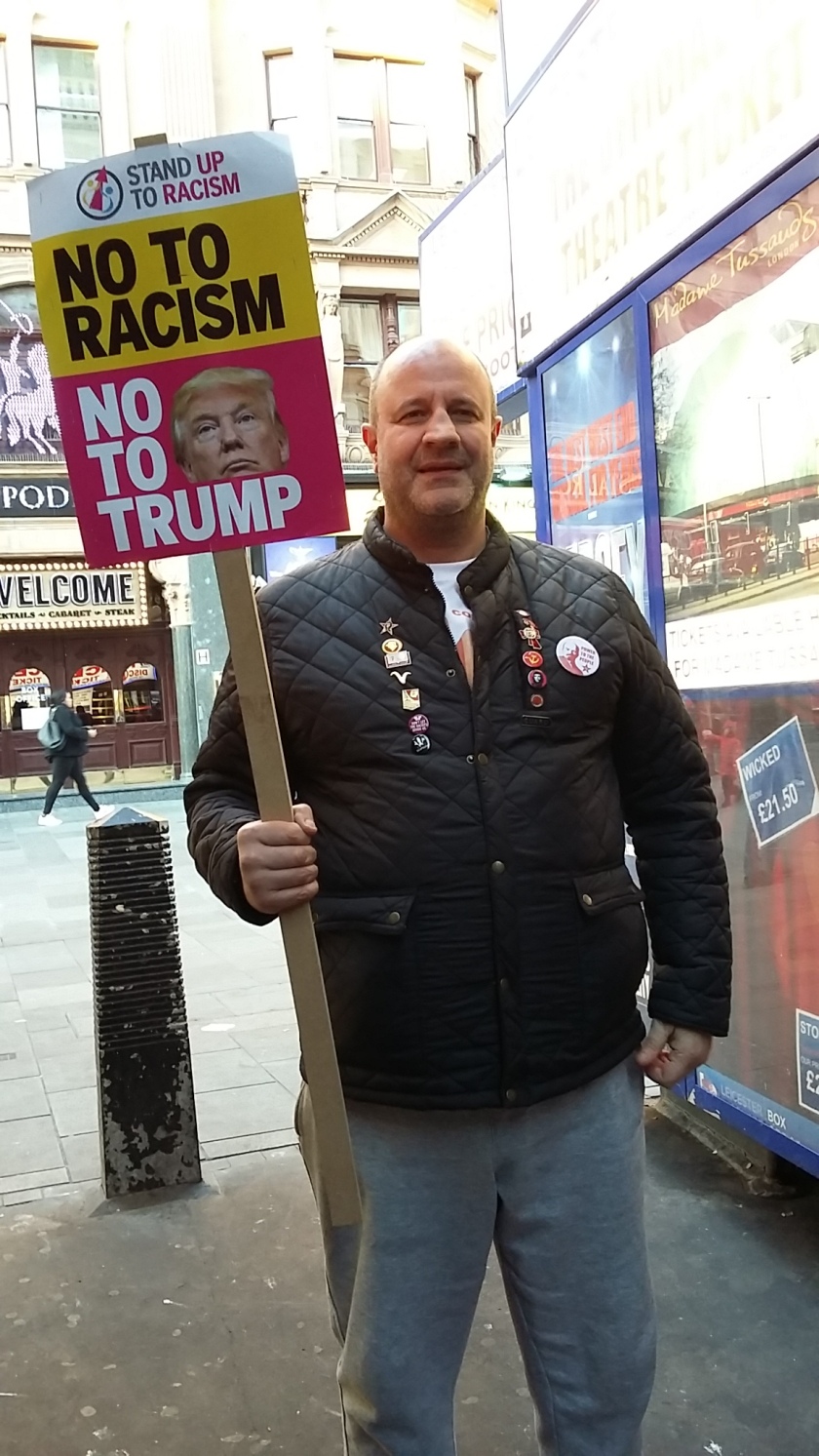 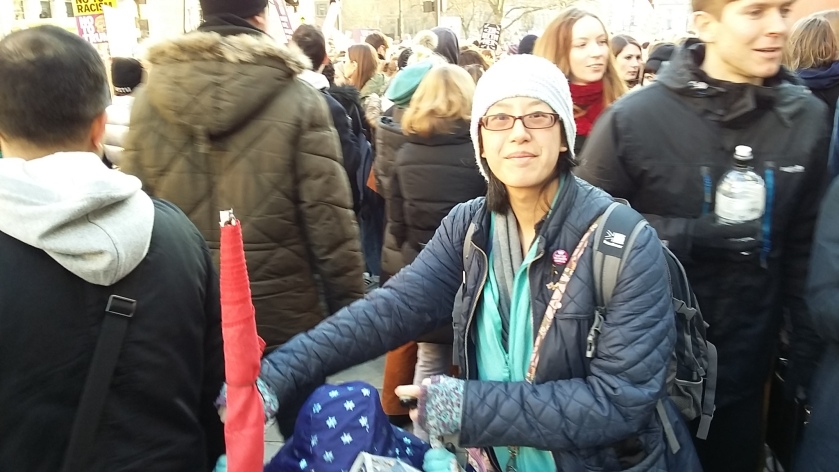 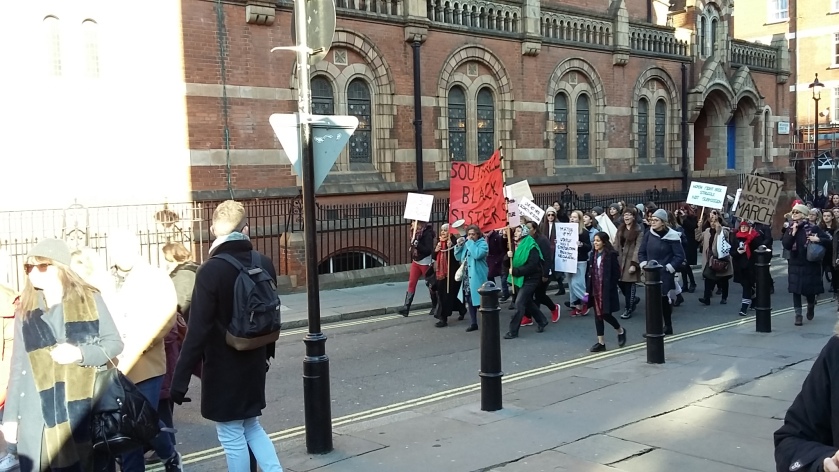 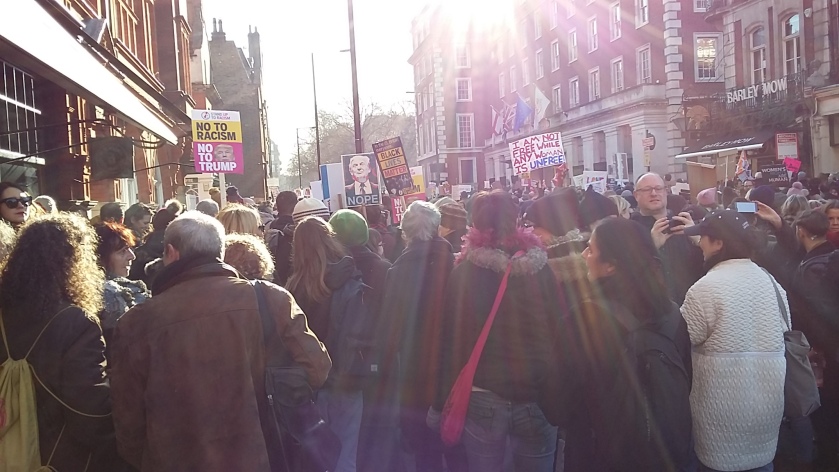 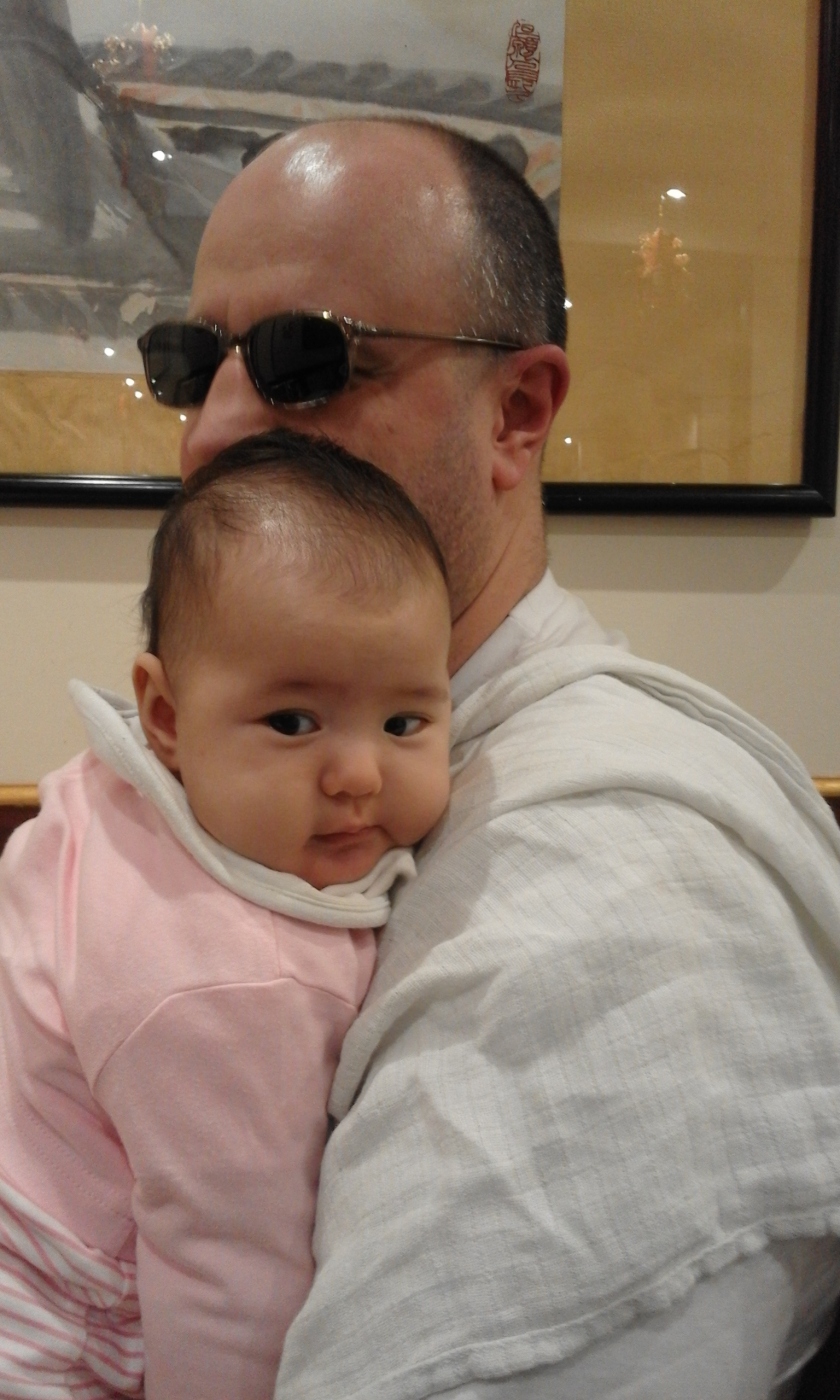 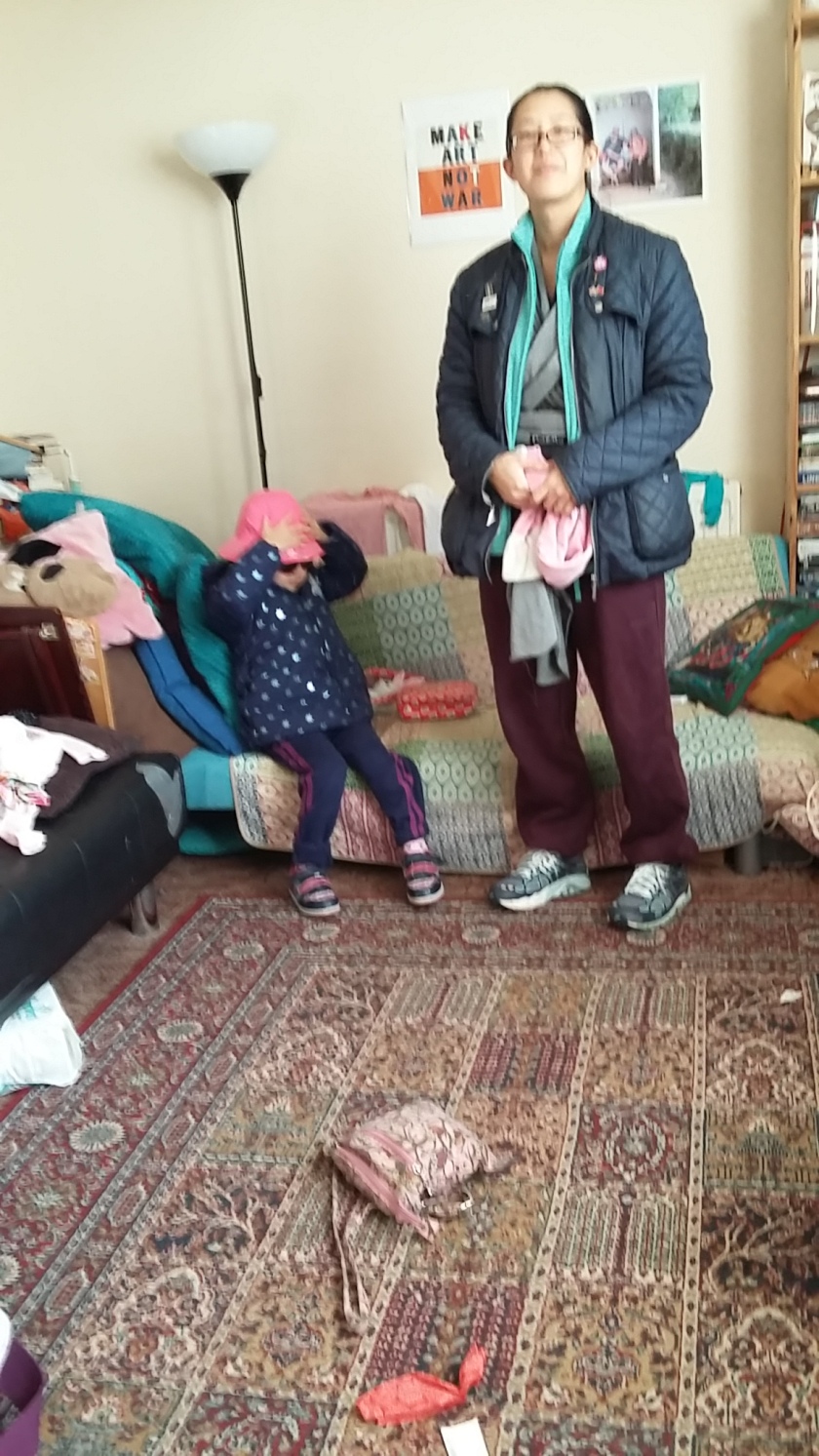