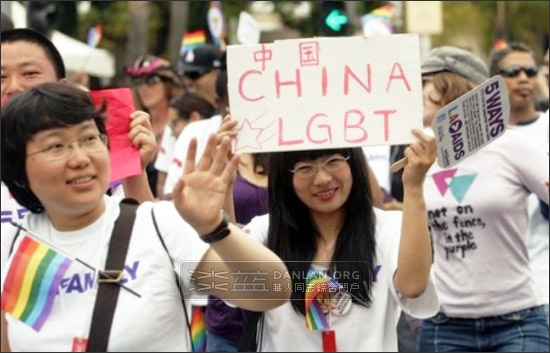 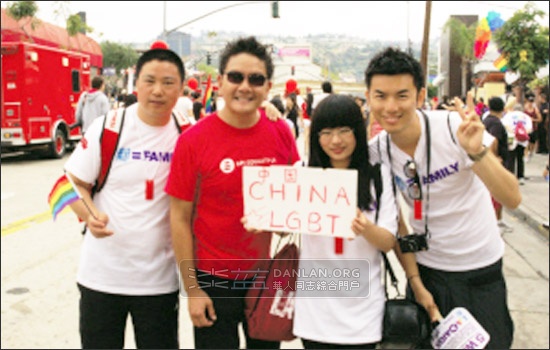 Translator’s Note: Gay Rights exist in China, but they are emerging from a totally different historical, economic and cultural base.  Gay Rights in China should not be seen as the same as Gay Rights (that vary) in other parts of the world.  I once heard Peter Tatchell (the emanate Gay Rights Activist in the UK) refer to China as a violator of Human Rights and ‘anti-gay’.  Although I respect this man (and have met him on protest marches in London), I consider his view on China to be incorrect.  China’s gay community needs support and not criticism from the foreign Gay Community – because gay people in China are ‘Chinese’ and this cannot be ‘cured’ or ‘changed’ through a bourgeois dislike for Chinese Communism.  ACW 31.5.2016

For the first time in its 41 year history, Comrades from Communist China have attended the LA Gay Pride Event.  Pictured above from left to right are Chinese comrade ‘A Qiang’ (阿强), ‘Huang Daozheng’ (黄道政) the head of the LA Gay Organisation, Chinese comrade ‘Xiao Tiehe’ (小铁和) and Dylan Chen.  According to reports of the 13th, June, 2011, four Chinese comrades left Guangzhou, Wuhan and Shanghai, to represent Mainland China at Gay Pride for the first time in its 41 year history.  The four comrades from China are all the heads of gay organisations situated in Guangzhou, Wuhan, and Shanghai and this is why they were chosen to travel to the US.

Xiao Tiehe is a student from Zhongnan University and is the head of the youth wing of ‘Rainbow’ – a Wuhan Gay Rights Organisation.  She commented that after four weeks in the LA Gay Community that she had learned a lot and gained valuable experience.  The LA Gay Community was well organised with good relations with the broader community, which had developed clever and innovative commercial interests.  Xiao Tiehe was of the opinion that China had to learn from this very positive experience, and that the situation in LA was currently impossible in China at the moment.  A Qiang (from Guangzhou) explained that the LA Gay Community was well organised and self-financing, and in fact had paid for the Chinese comrades to visit and stay in the US.  Dylan Chen has arranged gay events in Shanghai and has attended gay events in Hong Kong, but he said that by comparison the Chinese events seemed ‘shy’ when compared with the confident and extrovert nature the LA Gay Pride Event.