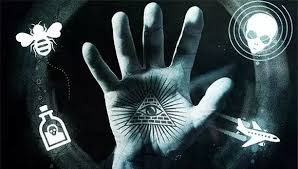 The contemporary era is marked by distrust of government, and dismissal (to varying degrees) of mainstream media reports, films and apparently authoritative texts.  This has been aided dramatically by the advent of the internet in the 1990’s that allows millions of people to immediately share information at a touch of a button.  This building-up and sharing of knowledge operates outside of official government and mainstream media, and has taken on a creative life of its own.  Generally speaking, it seems that the ‘conspiracy theory’ is fuelled by an intuitive sense that society as it exits, (and those who run it), is not being honest and does not always present the ‘truth’ about important (or less important) current or historical affairs.  What is happening here?  Why would the citizens of the Western world conspire to create a ‘counter-narrative’ to the version of events decreed by national governments and disseminated through the mainstream media?  The Western world, is of course, capitalist and liberal democratic.  This means that the prevailing economic system is not only ‘unjust’, but is premised upon a ‘lie’ that is taken as ‘truth’.  Karl Marx (in his epic Das Kapital) explained that workers are exploited because they are never paid the full amount of money that their labour produces.  This is because the managing class pays only enough in wages to keep the workers ‘alive’ and able to ‘function’ as an exploitable labourer.  The difference between the small amount of the wages paid – and the actual true amount of profit made for the managers is termed by Marx as ‘surplus value’.  The managing class (that although owns the means of production, does not carry-out any of the hard labour) takes this profit which maintains and protects its opulent lifestyle and political power.  This is the fundamental ‘conspiracy theory’ (that happens to be exactly correct) that underlies all capitalist societies, and which motivates (albeit intuitively) the questioning of every official story in a piece-meal fashion.

As the minds of the workers are the product of conditioning from birth (by bourgeois society), they are taught that working for small amounts of pay in poor conditions is correct (and natural), and that the bourgeoisie is equally correct to harvest all the profits for its own selfish purposes.  Not only this, but bourgeois society also controls all the schools, colleges and universities, and ensures that the default setting for scholarship is that of supporting the capitalist, bourgeois society.  In this sense, although bourgeois society deals in secular science, it is ensured that nothing ‘Socialistic’ is ever proven as being more ‘true’ (and therefore more beneficial to society) than bourgeois, capitalist greed.  Bourgeois science treads the thin-line of purporting to be always searching for the progression of human knowledge, whilst simultaneously ensuring that knowledge and science do not contradict the psychological, physical, economic or political ‘norms’ of bourgeois society.  It seems that the masses of ordinary people living within Western, bourgeois society, are intuitively ‘aware’ that something is not quite right with the society within which they exist, but do not possess in general, the personal or group insight to understand the fundamental problem, but instead take a scatter-gun approach to attacking a bourgeois theory here, or a bourgeois theory there.  This is because ordinary people are aware that something about their life is inherently false, but are unable to identify exactly what it is.

Therefore, it can be correctly stated that ALL bourgeois explanations, no matter how factually correct they may seem on the surface, are in reality ‘false’ because the justifying underlying paradigm (of the systemic exploitation of the masses) is never made ‘apparent’ or ‘clear’.  It is not stated in any bourgeois textbook that the facts contained therein are tailored to keep in place a ruthless capitalist system, that although utilising the notions of ‘freedom of thought’ and ‘freedom of thought’, nevertheless strongly defends its own class privilege and position within society, by limiting free thought and free speech!  Bourgeois science represents the middle class, because it is that class which has developed this science and manipulated it so that it only develops in a specific ‘middle class’ friendly direction.  This is essentially an ‘anti-working class’ narrative used to control and define society and reality.  By and large, conspiracy theorists are taking matters into their own hands, and are questioning virtually everything bourgeois science has claimed to have achieved.  Some aspects of these conspiracy theories are valid, whilst other aspects are incorrect.  However, the ‘truth’ factor of these conspiracy theories lies not in whether they are ‘correct’ (when measured through the auspices of bourgeois science), but that they exist at all.  The genre of conspiracy theory represents a working class shift from total domination by the bourgeoisie, to a system wide ‘questioning’ of anything the bourgeois system has ever said.  Regardless of the ‘facts’ contained within each and every conspiracy theory, the existence of the theory itself is absolutely ‘valid’ as a counter-narrative to the fundamental ‘lie’ that underlies bourgeois, capitalist society.  Of course, bourgeois science criticises these conspiracy theories as being ‘incorrect’, ‘fraudulent’ and ‘false’, etc. This is exactly the same bourgeois science that never reveals its underlying class bias, or its mission to hinder the development of objective science in any other direction, than in the support of the bourgeoisie itself.  Bourgeois science is not ‘free’ science, but is limited and conditioned by its own class structure and narrow view of the world premised upon the accumulation of profit.  Conspiracy theory thinking breaks out of the ghetto of bourgeois limitation, and attempts to reconstruct a different way of viewing the objective world.

Many workers who create conspiracy theories, are of course not entirely aware of their own bourgeois conditioning, and have never read the works of Karl Marx.  They are unaware of the ‘inverted’ nature of the mind-set of the bourgeoisie, or that their attempt to break out of bourgeois ensnarement, represents a rudimentary proletarian attempt to ‘rebel’ against psychological and physical imprisonment.  This development is dialectical in nature, and represents an evolutionary stage in the minds of the workers, that although not organised (or even perceived for what it is), does represent the power of the internet and the corresponding effects this had had on the ordinary human mind.  More than this, however, but many conspiracy theories are elaborately constructed and represent an important development of lucid and three-dimensional human thinking.  Regardless of its factual or non-factual content, the conspiracy theory offers an intriguing integration of ‘thinking’ with ‘imagination’ that may well serve as the basis of an entirely new and far more progressive proletariat science that will lead humanity out of the bourgeois morass it currently exists within.