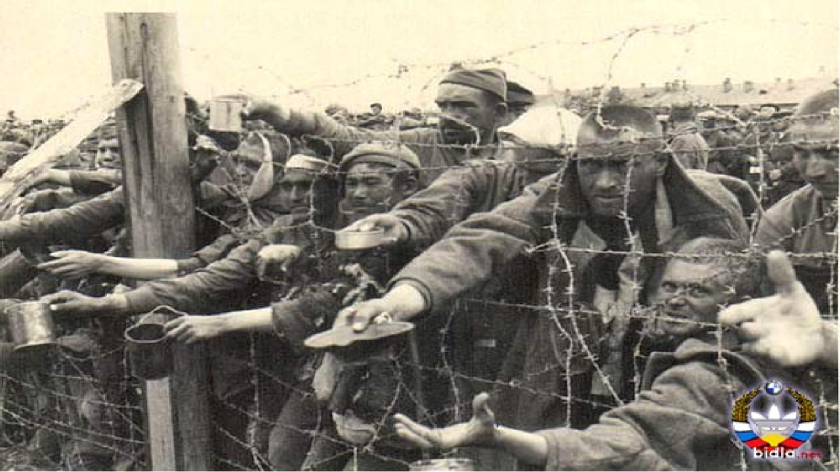 Author’s Note: Many photoraphs routinely presented as ‘Jewish’ people in Hitler’s Death Camps, are in fact pictures of Soviet POWs. Obviously, millions of Jews were murdered in these terrible places, but the suffering of the Soviet POWs is often ignored or ascribed to another group. At Buchanwald Death Camp, Soviet POWs were shot or garrotted, whilst others were used in medical experiments. The extract below, discusses the medical experiments of deliberately infecting human text subjects with typhus and malaria, etc. These tests were not only always fatal, but very painful and agonising until death ended the suffering. ACW (25.7.2020)

‘Questioned by the Tribunal on the method of selecting test persons for these series, Dr. Kogon made the following remarks:

“The election of the Test Persons (TP’s) was not the same at various times. At a very early period all the prisoners in the camp were requested to volunteer. The matter was described as harmless. The men would get substantial additions to their rations. After one or two experiments it became impossible to find volunteers. From then on Dr. Ding requested the camp physician or camp headquarters to make available persons suitable for his experiments. He set no special qualifications. Headquarters picked the men at random and by whim, regardless of whether they were criminals, political prisoners, homosexuals, or so-called anti-social elements. Intrigues among the prisoners in the camp also played their part, and occasionally men were admitted to the experiments for no particular reason at all. From about the Fall of 1943 on, the three camp leaders refused any longer to assume the responsibility for selecting the test persons. Dr. Ding too was no longer satisfied with oral instructions from Mrugowsky to conduct the experiments, but demanded written orders. To this end he appealed to Mrugowsky with the request to have the Reich Leader SS himself name the men for the experiments. In line with a directive from Himmler, which I myself saw, SS Major General Nebe, of the Reich Criminal Police Office in Berlin, thereupon decreed that henceforth only men were to be used who were serving penitentiary sentences which hat at least ten more years to run.”

Asked by the prosecutor whether the test persons were exclusively men under sentence of death, Dr. Kogon replied:

“I do not know of a single case in which a man was admitted to the experimental ward of Block 46 because he had been sentenced to death. Once, in the case of four Russian prisoners of war, it was asserted that they were to be shot. But they were not under sentence. They belonged to that category of Russian prisoners of war, of whom some 9,500 were shot or hanged or garrotted at Buchenwald.”