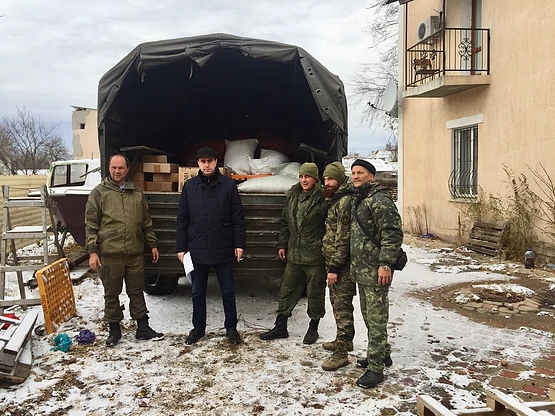 More than 10 tons of foodstuffs – provided by the Communist Party of the Russian Federation – have been transported by the Lugansk Communists to the frontline (anti-fascist) positions of the People’s Militia of the LNR. On November 17th, about 2 tons of products were delivered by the 16th Leshy-Yarga Armored Personnel Carriers to the defense line in the Slavyanoserbsky region. The cargo included potatoes, vegetables, stew, sunflower oil, cereals, sugar and hygiene items. On behalf of Lieutenant-General Gennady Benov – Chairman of the Union of Soviet Officers – and First Secretary of the Central Committee of the LNR Communist Party – Igor Gumenyuk – presented a number of “100 Years of the Red Army” medals to the most distinguished soldiers.