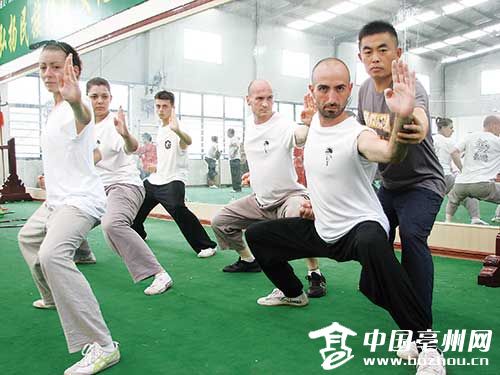 The five Italian guests are from the Italian Ch’an Martial Arts Federation – a local martial arts club dedicated to cultivating Chinese martial arts and learning about the beauty of traditional Chinese culture in the West. Among the five, there are college students, film-makers, and farm managers. They come from different jobs and diverse backgrounds. They often gather together to study Chinese martial arts and are full of curiosity and yearning for China. The team leader – Max – told reporters that they had visited Zhangzhou (Fujian province) the day before. Under the guidance of local martial arts teachers in Zhangzhou, everyone was carefully taught the movements of traditional martial arts movements – one by one – and then applauded the ability of the martial arts instructors. Prior to this they visited Huaxiu, Huazuyu and other similar tourist attractions. Before they came, they heard that this is the hometown of Hua Tuo and Cao Cao – and this only deepened their curiosity…

On the morning of July 29th , Max and his entourage came to the Jingwu Pavilion of the Beijing Mosque, and received instruction from traditional Islamic martial arts teachers in such arts as ‘Cha Quan – Zha Quan’ (查拳) and ‘Clarity Raise Palm’ (晰扬掌 – Xi Yang Zhang), etc.

Qiala and Andelia are brother and sister. They said that many people in Italy have learned Chinese martial arts through the Wushu Alliance. They have always yearned to visit China and had been told that Ganzhou is the hometown of martial arts. Whilst in China all agreed that the experienced the true greatness of traditional martial arts. Team leader Max said that according to the itinerary plan, they will stay in the city for three days, and will also learn other traditional martial arts such as ‘Five Birds Playing’ (五禽戏 – Wu Qin Xi). After returning home, they will teach what they have learned to more people. (Reporter Liu Jingxia – 刘景侠)