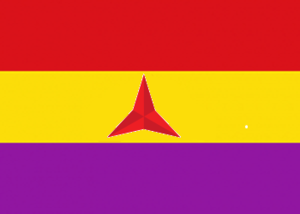 The flag of the International Brigades represents those foreigners who volunteered to fight for the democratically elected (Socialist) government of Spain during the Spanish Civil War (1936-1939). The International Brigades were funded by the ‘Comintern’, or ‘Communist International’, with its headquarters in the Soviet Union, administered throughout the various international Branches of the Communist Party. Around 40,000 non-Spanish people volunteered, drawn from a broadly leftist political spectrum. As the fascist General Franco (supported as he was by the Catholic Church, Nazi Germany and Fascist Italy) neared victory in 1938, the International Brigades were withdrawn from Spain, with the Republic being finally defeated a year later. The Red, yellow and purple stripes derive from the flag of the Second Republic of Spain (1931-1939):

The central emblem depicting Republican Spain was removed, and was replaced with the ‘Internationalist’ three-pointed Red Star emblem. This changed denoted the progressive ‘Internationalist’ effort mounted to save Republic Spain. This was probably a Soviet initiative at the beginning of the war, as the International Brigades became involved:

The three-pointed Red Star is the emblem of unity of all progressive forces. It was the emblem of the Basel Section of the First International and meant the world-wide cooperation of Marxists, Anarchists and Republican Democrats. Sometimes this is expressed as the unity in principle of Marxists, Anarchists and Trade Unionists, depending upon context. However, during the Spanish Civil War (1936-1939) the three-pointed red star – which in this context was used to denote the unity of the Republican forces – Anarchists, Socialists, Communists and Democrats – was employed to denote the volunteer fighters of the International Brigades, Therefore, from its earliest inception, the three-pointed Red Star was used to denote the Marxist concept of ‘Internationalism’.

The concept of ‘Internationalism’ seeks to unite the different sections of the working classes around the world, (as expressed during the First International founded in 1864), with the intention of improving living conditions. It derives from the political ideas of Marx, and has been extended to other political, economic and cultural spheres. The search for an international association of workers presupposes the recognition of all nations as equal, whilst respecting all manifest (historical-cultural) differences. Internationalism opposes ultra-nationalism and nationalist chauvinism, and economic-driven globalization movements that deny the value of culture and the differences between nations.