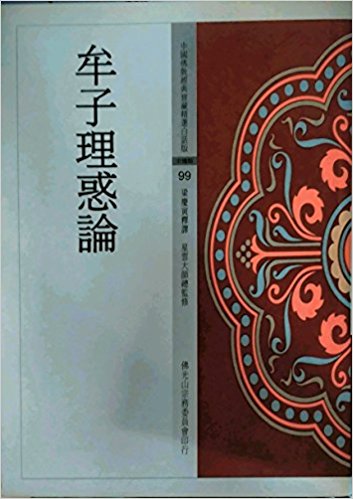 Maozi said: Even to mention the Way (道 – Dao) is to demonstrate the profound direction of movement. This is why the people should be directed toward ‘non-action’ (無為 – Wu Wei). Lead through control and there will be no hindrance ahead – practice restraint and there will be no blockage behind. If it is pressed-down there will be no resistance – when it is looked at, it cannot be perceived. If the ears are used – it cannot be heard. Although the four directions are infinite – the Way encompasses all and yet extends beyond. The Dao also penetrates the smallest of spaces and cannot be prevented from permeating everywhere. This is how I explain the term ‘Dao’. (Third Paragraph)

Master Mou’s manual is composed of a Preface, a Postscript and 37 short chapters (or paragraphs) arranged in a ‘question and answer’ format. It is set in the late Eastern Han Dynasty, and is an example of a Chinese intelligentsia (working with only very basic and limited information), attempting to a) explain exactly what Indian Buddhism is, and b) make a case for its accommodation within China’s Confucian culture. Although the notion of Indian Buddhism arrived in China probably sometime between the 1st century BCE and the 1st century CE, what was conveyed remained vague and difficult to understand when not explained within a correct historical or philosophical context. It would take many hundreds of years of Indian Buddhist masters visiting China, and devout Chinese pilgrims travelling to India, before the true philosophical foundations of Buddhism could be said to have been transmitted into China. The Han Dynasty scholars of China had very little information to go on, and limited their responses to either a complete rejection of this ‘barbaric’ foreign superstition of Buddhism, or (as in the case of Master Mou) attempted to use the familiar teachings of Confucian and Daoist philosophy to explain and accommodate the ‘principle’ of Buddhism.

The text in question is known in China as ‘牟子理惑论’ (Mou Zi Li Huo Lun). This title can be translated as:

Taken together, this title can mean ‘Master Mou’s Reason-Doubt Treatise’, and reflects the question and answer format used throughout. A question that ‘doubts’ the applicability of Indian Buddhism for China’s Confucian culture is ‘resolved’ by a precise answer that utilises ‘reason’ to make its point. Therefore, Master Mou believes that he possesses the fundamentally ‘correct’ answers that if studied carefully, resolve every single ‘doubt’ about the presence and purpose of Indian Buddhism within China. This possession of an advanced knowledge gained after years of scholarly study, consideration and developmental debate, is distinctly ‘Confucian’ in nature, despite the fact that Master Mou often alludes to the Daoist teachings of Laozi (老子) to make his various points. Master Mou ‘rejects’ the Daoist principle of ‘Immortality’, as he is well aware that Indian Buddhism often discusses ‘cycles’ of birth, death and rebirth – an idea that at the time was thoroughly ‘alien’ to Chinese culture. Confucian culture accepted ‘death’ and respected the deceased ancestors through the correct practice of ritual and filial piety, and had no theory of ‘re-becoming’. Daoism had an idea of ‘Immortality’ as being either a long life (such as 100 years), or the more superstitious notion of ‘living forever’. Both Chinese schools of thought, however, valued ‘virtue’ above all else, and assumed that good behaviour led to good experiences (an idea that seems very similar to Buddhist notions of ‘karma’ as being the product of cause and effect). Whenever Master Mou was confronted by an obstinate Confucian critic who assumed anything foreign to be inferior, Master Mou would counter with Laozi’s teachings as found within the Dao De Jing, particularly that which speaks of an ‘unformed’ or ’empty’ essence that underlies (and contains) all phenomena. For Master Mou, the teachings of Laozi conform what the Buddha said, namely that things pass away and are not prone to permanency. Master Mou equated the Confucian and Daoist use of the term ‘Dao’ (道) – or ‘Way’ – with the Sanskrit ‘Dharma’ which is still in use today, although the term ‘Dharma’ is also more readily rendered into the Chinese language as ‘法’ (Fa) or ‘Law’.

Master Mou’s manual is set during the time of the ‘Yellow Scarves Rebellion’ (黃巾之亂 – Huang Jin Zhi Luan) which occurred between 184-205 CE, the Eastern Han Confucian scholar known as ‘牟子’ (Mouzi), fled to ‘Jiaozhi’ (交趾) – an area of North Vietnam now known as Tonkin (at this time, Vietnam was part of Han Dynasty China). It is in Jiaozhi that Master Mou is said to have entered into a debate with Confucians and Daoists, with the resulting discussions collected into a single 37-chapter volume of questions and answers, which explains why it is (according to Master Mou), that the Buddha of India is compatible with Confucian China, and acceptable to Daoists. Despite everything described in the text being historically applicable to the intended era stated, the fact remains that there are no Han Dynasty texts that mention Master Mou or his manual (which is often thought of as being the ‘first’ indigenous Chinese language text discussing Indian Buddhism). Master Dao An (道安) [312-385] does not mention Master Mou’s manual in his compendium of Buddhist texts extant within China during his life-time, with the earliest known mention of the ‘牟子理惑论’ (Mou Zi Li Huo Lun) occuring in the ‘Dharma Record’ (法论 – Fa Lun) associated with Lu Cheng (陆澄), which is dated to around 465 CE.

My personal view is that the received Mouzi text contains information about Indian Buddhism that was probably not known in China during the latter Eastern Han period. Mouzi seems to know that Buddhist monastics follow at least 250 vows and are vegetarian, but in reality, it was not until Master Dao An (some 200 years later) that Buddhists in China ‘ordained’ properly and gave-up their worldly names. In fact, in Chapter 16, an enquirer refers to Buddhist monks in China as eating meat, drinking wine and having wives and children – all corrupt activities against the Buddha’s teachings. It might be the case that there was a very early Mouzi text that gave a Confucian-Daoist take upon Indian Buddhism, but that unknown later Chinese Buddhist authors ‘added’ legitimate details about Buddhism, to give the impression that Mouzi was more knowledgeable about Buddhism than he actually was. Another reason I think this might be the case is because if there really was not much difference between Confucianism, Daoism and Indian Buddhism, why bother converting? The point is that despite Mouzi’s ability to make Confucianism and Daoism seem compatible, they are two very different paths, with both being highly divergent from Indian Buddhism.

Is it likely that Mouzi could have ‘ingested’ the broad Mahayana doctrine, and had been conversant with its primary principles by the time he is believed to have compiled his manual? Some of the Mahayana Sutras were known at the Han Court due to the early translations of the Gandharan Buddhist monk known as ‘Lokaksema’ (支婁迦讖 – Zhi Lou Jia Chen), who arrived at the Han Court (in Louyang) and began the process of rendering Theravada and early Mahayana Sutras into the Chinese language between 167-186 CE (according to Chinese language sources). The English language Wikipedia page states that Lokaksema was born in 147 CE – and was at the Han Court from 150 CE! This is obviously wrong, as is that text’s assertion that Lokaksema was active in China between 178-189 CE. Even before this time, however, the Parthian Buddhist monk known as ‘An Shi Gao’ (安世高) was active in China during the reign of Han Emperor Huandi (桓帝) – 147-167 CE. He is considered the first translator of Buddhist texts into the Chinese language, and appears to have specialised in Theravada Sutras. If it is assumed that Mouzi had access to Han Court Records, then it is logical to assume that he was aware of the Theravada School, and yet he says nothing about this school in his manual. More importantly, it might well be the case that as Lokaksema was active during the time of the apparent compiling of Mouzi’s manual, there is no reason to assume that Mouzi ‘knew’ of Lokaksema translations (which were still a work in process). It is much more likely that Mouzi would have known of An Shi Gao’s work, and yet the problem re-appears of the non-mention of the Theravada School. Mouzi did not mention the work of either translator, or explain where his knowledge of Buddhism originated. This omission could indicate a sectarian agenda representative of a later generation, one that privileged the Mahayana over the Theravada. Finally, Mouzi might have found it much more conducive to compare the Chinese schools of Confucianism and Daoism with the more practical and functional Theravada teaching, than upon the more ethereal Mahayana doctrine.