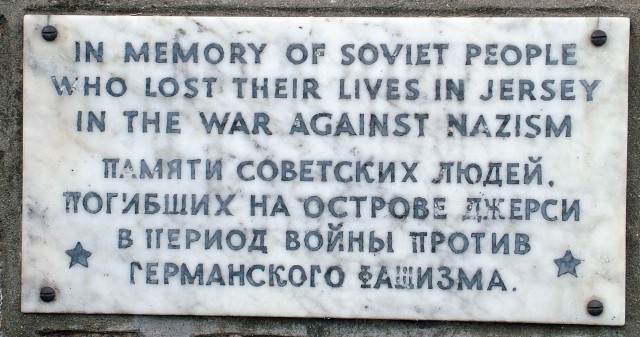 Whilst Winston Churchill and President Roosevelt were encouraging Joseph Stalin to actively engage the military force of Nazi Germany, both Western leaders were working behind the scenes to create the conditions for the eventual ‘collapse’ of the Soviet Union. When the Red Army ‘liberated’ Nazi occupied Ukraine, they found a well organised Nazi insurgency armed in-part with British and US weaponry (the battle against this Nazi insurgency was carried-out by the NKVD and lasted until 1947, but periodically resurfaced from time to time). Churchill was certainly not ‘happy’ with the presence of Soviet POWs on British soil, as he did not want any contact between ordinary British people (who were prone to Socialistic ideas), and Communist educated Red Army soldiers). Churchill was, however, perfectly happy to grant political asylum to Ukrainian members of the SS Galicia Division in Scotland, which had carried-out atrocities in Nazi German-occupied Ukraine during WWII (as part of the ‘holocaust). In the light of Churchill’s duplicity and flirting with Nazism, I recently watched the British film entitled ‘Another Mother’s Son’ to see if it contained any merit, a brief description of which reads:

‘Based on the true story of Louisa Gould, the drama is set during World War II on the Nazi-occupied island of Jersey. Lou took in an escaped Russian POW and hid him over the war’s course. The tension mounts as it becomes clear that Churchill will not risk an assault to recapture the British soil, and the island-community spirit begins to fray under pressures of hunger, occupation and divided loyalty. Against this backdrop, Lou fights to preserve her family’s sense of humanity and to protect the Russian boy as if he was her own.’

In fact, there is not much background information within English language sources about this film, or the apparently ‘true’ story it depicts. I have had to search Russian language historical texts to verify the content and plot, etc. What is beyond historical doubt is that once Winson Churchill withdrew British troops from the Channel Islands, the British Authorities on those islands decided that the best policy toward any Nazi German invasion was ‘collaboration’ with the Hitlerite forces. Even within Britain today, the collaborative behaviour of many of the ‘British’ people living on the Channel Islands still leaves a bitter taste in the mouth. This is compounded by the fact that many of the people living there today, are very wealthy, exempt from various British taxes, and continuously court a French identity. Indeed, so insular and exclusive has places like Jersey become, that ‘Another Mother’s Son’ could not gain permission to be filmed on the island, and instead had to settle for Somerset (situated to the West of the British Mainland). Apparently, one or two highly influential inhabitants of Jersey today, were not so much ashamed of their island’s historical collaboration with the occupying Nazi German forces – but rather were more concerned with Jersey’s historical association with ‘assisting’ Soviet POWs – although to be fair, most Jersey inhabitants were far too busy cosying-up to the Nazi German Authorities, to have cared too much about the brutal treatment routinely meted-out to Red Army prisoners by their SS Guards.

This film is typical of one that tries to tread the Cold War tight-rope of feeling sorry for Soviet POWs on the one hand – whilst never appearing to condone the ‘Communist’ political system they represent on the other. This ridiculous homage to US Cold War disinformation leads to films that are purportedly ‘true’, literally changing the facts (here and there) to support an obvious anti-Soviet propaganda. At no time in this film is the word ‘Soviet’ used to describe the Russian prisoners – despite the fact that the term ‘Soviet’ is mentioned in both the English and Russian languages on a commemorative plaque located in Jersey. What is true, is that a brave British woman named ‘Louisa Gould’ (of Jewish ancestry) ultimately lost her life in a Nazi German gas chamber, for helping the escaped Soviet POW named ‘Fyodor Burogo’ (Федора Бурого).

Hitler wanted to secure his rear prior to his invasion of the USSR, and so the Channel Islands were successfully invaded in early 1942. The first batch of prisoners of war was transferred to Jersey in early 1942. A number of SS Nazi German Concentration Camps were established on the Channel Islands (notably Alderney), which were used to work Soviet POWs, French, Poles, Czechs, and Spanish Republicans to death. Soviet POWs were forced to work 12 hour day and night shifts in the local quarries – where they were fed only meagre rations – and routinely beaten. The Nazi German Commandant was ordered to work each batch of Soviet prisoners for six months only in the quarries, before finally murdering them all in often barbaric fashion (designed to save ammunition). Any Jersey inhabitant showing any type of mercy toward Soviet POWs was either shot on the spot, or ‘tried’ and transported to Germany. The Russian-language description of this film offers much more background detail:

‘The plot is based on the real fate of the photographer from Tomsk, Fyodor Burogo, who was sheltered by a resident of the English island of Jersey from fascists during the Second World War. The script was written by Louisa Gould’s grand-niece, writer Jenny Lecoet, who for many years collected materials about the feat of her relative. Louise was played by British actress Jenny Seagrove, Fyodor – Julian Kostov. He really looks a bit like the real Burogo, whose photographs are still kept in the museum of the 166th Infantry Division, located in Tomsk school No. 51. The veteran died in 2001, but the “Komsomolskaya Pravda” found out his story from those who knew him personally.;

Many of the Soviet POWs were transported from the Ukraine to the Channel Islands, where the Nazi German policy of ‘Operation Ost’ (i.e. the eradication of the Slavic race) was put into effect. In this film, the script describes Fyodor Burogo as a ‘pilot’, when historical records show that he was in fact a Rad Army infantryman. Despite being a hardened frontline soldier who had survived the horrors of Nazi German warfare in the USSR, and the equally brutal and vicious imprisonment reserved for those termed ‘inferior races’ by Hitlerite ideology, this film portrays him as a weak man who urinates himself when a Nazi German officer talks to him, and a man who is prone to immature emotional outbursts. His character in the film is also (and falsely) depicted as ‘going to church’ and being ‘interested’ in the ‘Christian singing’ – events that never happened at all. In fact, Fyodor Burogo was a patriotic Soviet soldier and citizen who despised organised religion. The final ‘lie’ that this film portrays as ‘true’ is the false statement that the Soviet government routinely ‘discriminated’ against ALL returning Soviet POWs. This is historically untrue. Many returning Soviet POWs were treated as heroes – particularly those that had tried to escape, or had actually escaped (as was the case with Fyodor Burogo). Every captured Soviet soldier had a duty to try and escape and continue the fight against Nazi Germany. What is true (but not included in this film), is the fact that those minority of Soviet POWs who collaborated with the Nazi German occupiers were arrested and tried for treason. This was exactly the same fate that befell any Allied soldiers who collaborated with the enemy. As is usual of this type of film, it portrays anti-Soviet propaganda by ‘sentimentalizing’ the Russian characters it depicts, effectively ‘stripping’ them of their ‘Sovietness’. It is not entirely a ‘true’ story as it deliberately misrepresents many of the historical facts. Fyodor Burogo had a long and fulfilling life and was admired for his bravery by the Soviet State – an attitude toward his military service that followed him into modern Russia post-1991. 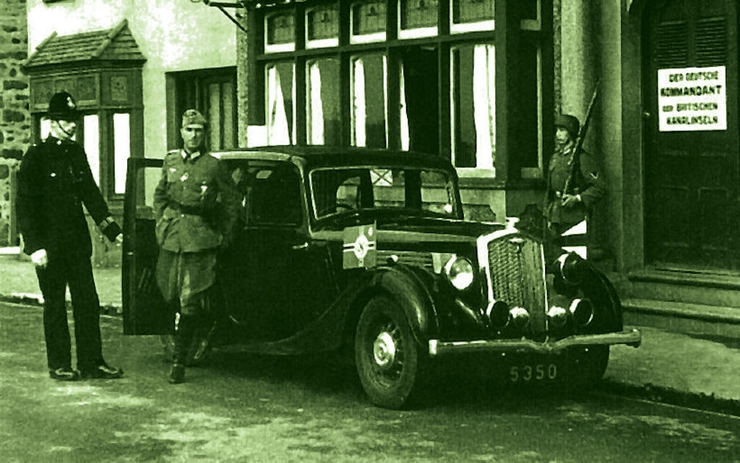 After the end of WWII, Russian language sources state:

‘”We lived next door to Fyodor Polikarpovich Burogo on Kartashov Street in Tomsk,” says Natalya Morokova, who studied the history of the 166th Infantry Division. – In the 1960s, Fyodor Burogo often gave lectures at schools in front of students, talking about his extraordinary biography. Then his name was familiar to everyone in our city. In addition, he was a famous photographer, his pictures were often published in magazines, newspapers, books. He was a very kind, intelligent person.’

So much for returning Soviet POWs being routinely discriminated against, by the Soviet Authorities! Fyodor Burogo was hidden by Louisa Gould (whose son had been killed earlier in the war), but her family was betrayed by other Jersey inhabitants. Before her arrest, Louisa managed to get Fyodor Burogo out to safety. Whilst a hunted fugitive on te island, Fyodor Burogo illegally listened to radio broadcasts from London. Having translated these news reports into the Russian language, he then ‘threw’ hundreds of leaflets over the wire of the Concentration Camps holding Soviet POWs – so that he imprisoned Comrades could gain knowledge of all the Red Army advances, successes and victories. This episode of Fyodor Burogo’s life on the island of Jersey is completely omitted from this film, as is the fact that Fyodor Burogo, along with other escaped Soviet POWs (and a small number of Jersey inhabitants), planned an armed uprising against the Nazi Germany occupiers, scheduled to begin on May 15th, 1945. However, London soon announced that the Red Army had already taken Berlin on May 9th, and the armed uprising on Jersey was called-off. As the 10oth Anniversary of the Russian ‘Ocober’ Revolution approaches, it is important that films such as this are studied carefully, and their short-comings clearly revealed.