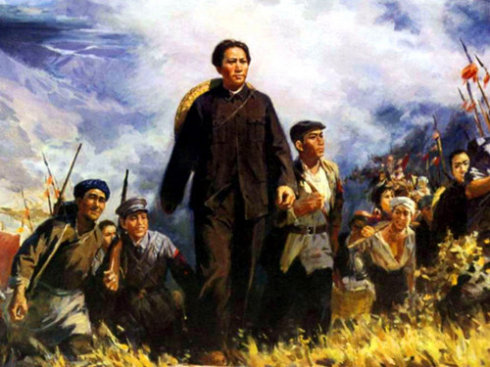 ‘We think too small, like the frog at the bottom of the well. He thinks the sky is only as big as the top of the well. If he surfaced, he would have an entirely different view.’

The political system in the UK is complex and multi-layered. It is not simple, and neither is it predisposed to sudden change or radical influence. It has developed over hundreds of years, and operates through representative democracy. As a historical process it is not perfect, and has been the means through which the ruling classes retain power and influence over the British Working Class, and the subjugated peoples of the British empire. In-short, the British political system has evolved to represent ‘conservatism’ in its leftist, centrist and rightist political manifestations. It is also the bulwark of a vicious, and predatory capitalist system. The British Labour Party – although founded by Marxist-influenced ‘Socialists’, and named after the very concept of ‘Labour’ that Karl Marx and Friedrich Engels used to assess and analysis the capitalists system, (i.e. the Proletariat can only sell their ‘Labour’, the only exploitable attribute they possess) – nevertheless, it formally and officially ‘broke’ all ties with ‘Communism’ early in its history, and always distanced itself from the Russian Revolution of 1917, and the subsequent development of the Soviet Union. Today, the Labour ideologues would have you believe that the Labour Party (which carries a Marxist name), has had no historical connection with ‘Communism’ (i.e. ‘Scientific Socialism’), and no ideological inclination toward Revolutionary Marxism or Marxist-Leninism! This is essentially a re-writing of history by the bourgeois influences that penetrated the Labour Party movement early in its history, and diverted it away from a Working Class Revolutionary path, and toward a more conservative, middle-class friendly, capitalist-supporting direction. This re-orientation moved the Labour Party away from a direct Revolutionary path, and toward one that supported the status quo, and in so doing, the imperialist and colonial tendencies of the British State. In fact, even the Labour Party’s so-called ‘Socialist’ tendencies have been influenced by Trotskyism, and correctly described by the British Maoist Movement known as the ‘Workers’ Institute for Advanced Theoretical Studies of Nature’ as being representative of ‘social fascism’.

For the freedom fighter living in the UK, a certain level of political awareness must be developed that is three-dimensional in nature, and which takes into account the material circumstances as they currently exist. The Labour Party possesses many political faults as pointed-out by many leftist groups, this is undoubtedly true and beyond question. Although it has been historically linked to Socialist Revolution, its official policies have always been to ‘preserve’ and ‘maintain’ the bourgeois status quo in the UK via various schemes of limited wealth re-distribution. In 1948, this included the development of a comprehensive Welfare State and National Health Service (ironically both premised upon the Soviet model), and which transformed Working Class existence in the UK and Northern Ireland (but in no other colonial out-post). Of course, these developments, although relieving poverty and raising levels of health to unprecedented levels, nevertheless, were designed to ‘prevent’ a full-scale Revolution in the UK, with the British Proletariat taking political power for itself, and possibly – as the People’s Republic of Britain – forming an anti-American alliance with the USSR! By and large, this ‘Socialist’ policy of Labour worked rather like a Trotskyite programme designed to prevent a Marxist-Leninist inspired Revolution in the UK. All this was made ideologically redundant with the rise of the neo-conservative Tony Blair, and his openly and blatant rightwing leadership of the Labour Party. From 1997 to 2010 – the Blairite Labour Party – acting inaccordance with Tory sentiment and the capitalist State – did not reverse one Thatcherite cut or reform, and continued to dismantle the British Welfare State and NHS.

Today, although Jeremy Corbyn has lost a General Election, his lurch back to the left has earned him a great popularity amongst the British voters – particularly the young. Although he does not advocate a Socialist Revolution, he does prefer a ‘Socialistic’ Labour policy that moves away from the social destruction associated with Tory ‘Austerity’, and back to a soft model of re-distributing wealth through a ‘fair’ and ‘compassionate’ Welfare State and NHS. Of course, this can be interpreted as ‘Trotskyite’, but the fact remains that given the limited political choices that exist for the British Working Class in the liberal, democratic system they currently inhabit, Jeremy Corbyn represents a change in fortune that relieves the poverty and oppression currently enforced by the Tory government. It might be more conducive for Marxist-Leninists to view this situation wisely through the work of Antonio Gramsci, and consider what both Marx and Lenin taught. Until the Revolution – whereby a fully empowered Proletariat seize the means of production – an expedient Revolutionary path of agitation, propaganda, support and opposition must be followed, premised upon the correct political use of the non-inverted mind, and a wise consideration of current circumstances, and the possible effects of policy directions for the future. How will decisions taken today, effect the well-being of the British Working Class tomorrow? As far a I am concerned, as a British-Chinese person living within and around the British-Chinese community whilst interfacing with and reaching out to the English community, imperialism, colonialism, fascism and racism must all be fought without quarter being given, as should Trotskyism and any other anti-Working Class ideology! Marxist-Leninists must develop ‘wisdom’ and expel stupidity as a mean to effectively make Revolution! Power to the people!