As we marched into Trafalgar Square yesterday, a woman gave me the following leaflet (scanned below) as she moved through the crowd. Almost immediately, a suspiciously well-dressed (and groomed) middle-aged gentleman – using a folded umbrella as a walking stick – approached me out of the crowd, and said that I shouldn’t take any notice of the content of this leaflet (which I had not even time to look at), as the person featured in it was a criminal that had kept sex-slaves locked-up in his London flat! Of course, so intriguing was this explanation, that a few minutes later, whilst stood in Trafalgar Square, I read the entire leaflet. When this case blew-up in the British bourgeois media in 2015, I did not not pay it too much attention. A dim memory seems to tell me that I chalked it up to the usual anti-Socialist propaganda espoused by the British bourgeois media, and left it at that. However, having heard from the victims of the British State, I have decided to place their leaflet on this blog so that enquirers may read the other side of the story, and make-up their own minds. A Balakrishnan is the leader of a Maoist organisation in the UK that was formed in the 1070’s, and which has always opposed the British imperialist State – which it describes as ‘fascistic’. It came under a lot of police pressure during the Thatcher years, but it wasn’t until the Cameron years that the British State was instructed by the Tories (and LibDems) to deal with A Balakrishnan once and for all. Although both he and his wife were arrested in 2013, his wife was subsequently released without charge – whilst A Balakrishnan was ultimately imprisoned for 23 years on charges of keeping three women locked in a flat for sexual exploitation reasons (charges that he has always denied). An interesting question is why a happily married man in his early 70’s would require three younger women to serve his desires? Certainly his wife never supported the allegations that her husband used other women for sexual purposes (which would be ‘un-Maoist’ to say the least!). For the bourgeois press, however, (and even elements within the revisionist Communist Left in the UK), this story is cut and dried, and no further questioning of the motives of the British State is countenanced. It is interesting to observe how the ‘Eurocentric’ British Communist Left has sided with the ‘White’ bourgeois British State in this matter, and not once raised the allegations of ‘racism’ and political bias)as possible motives for the arrest and trial of A Balakrishnan. A Balakrishnan’s organisation can be contacted at the address featured at the bottom of the leaflet. 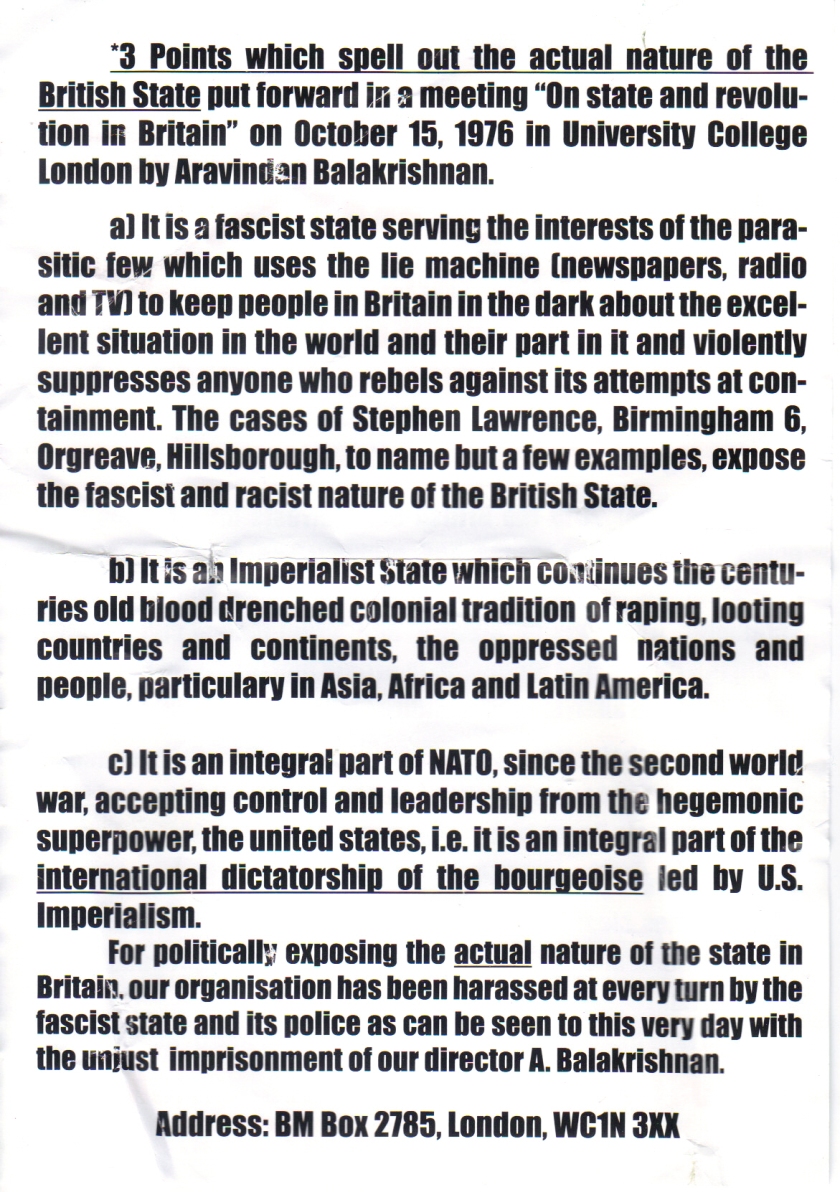