Much of Cornwall (situated on the South-Western tip of the British Mainland), is in many ways reminiscent of parts of rural Scotland, with its red bricks and Cornish Gaelic place names. Historically, this remote area represents an early British culture that escaped the devastating clutches of the invading Romans, Danish and German (Anglo-Saxon) tribes. Today, the urban and semi-urban proletariat live more or less in a total economic and cultural impoverishment (which sees a rampant encouragement of ‘racism’ and far-right support), with a small bourgeoisie owning all the property, and Local Councils, elected councillors and MPs all being people who do not come from (or live) in the areas they dominate. The local people are so educationally impoverished that a recent report stated that in a number of areas of Cornwall, five year old children were going to school still wearing nappies, and unable to even say heir own names. As this is the case, unemployment rates are high, and what jobs there are, are low-paid with little or no prospects for promotion or self-improvement. This dire situation existed prior to the 2010 General Election victory of the Tory-LibDem Coalition, but it has been made considerably worse due to ‘Austerity’ and the abolition of the Welfare State, Social Services, and the privatisation of the National Health Service, which has the cutting of medical care ‘free at the point of use’. In fact, so bad has been these destructive Tory-LibDem policies that the United Nations (UN) found the UK government Guilty of Crimes Against Humanity in 2016, for the deaths of between 10,000 and 80,000 People with Disabilities, deemed to be the direct (and ‘unlawful’) result of ‘Austerity’. Cornwall was already impoverished before this happened, and the ordinary Cornish people now suffer terribly under these latest (and vicious) Tory-LibDem cuts. The Cornish countryside is used as a playground for the privileged rich – who rent-out local property for ‘fetish’ holidays to the well to do – whilst ignoring the plight of the Cornish working class. So backwards is this bourgeois mentality that the backpage of the Cornish Times (7.4.2017-Page 64) ran an article where a local Tory MP went proudly on record stating that the rich holiday makers who come to Cornwall, assist the poor because all the food they ‘leave’ behind is gathered together and made into ‘food parcels’, that are distributed by the local ‘Food Banks’. The Food Banks, of course, are lauded as a step forward by the Tories – the very people who have cut the tax-funded Welfare State – and plunged Cornish workers into ever deepening states of poverty and suffering. No wonder the bigoted Tory David Cameron likes to ‘party’ in Cornwall – when he’s not out fox-hunting. 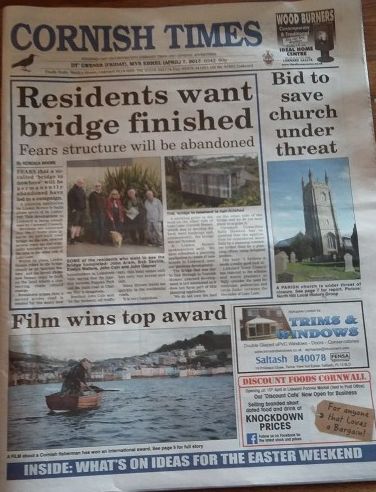