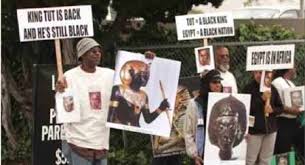 This article could have been called ‘The Irrational Defending of Whiteness’, but I felt that this title was too broad, and could be referring to virtually anything in the world of bourgeois, racialised politics.  My point here is quite simple – black African people built ancient Egypt – but ‘white’ racists are trying to re-write history by removing black people from history.  Why is this happening?  The roots lie in relatively recent history.  Black African people were enslaved during the last five hundred years or so, during the era of the European expansion of military and political influence, collectively termed Eurocentric imperialism and colonisation.  Due to the blend of industrial innovation, technological invention and religious zeal, the crushing yoke of Eurocentric political and economic domination spread to virtually all corners of the globe.  The Industrial Revolution (which first occurred in the UK, and then spread to other areas of Europe) gave a massive material advantage to the forces of marauding capitalism, racism and arbitrary brutality.  This new era of human production on the material plane, gave a physical advantage to the armies of the West, whose canons and guns easily swept aside the fighting forces of other groups of humans who were still living in pre-industrialised societies.  Despite this advantage, there still occurred the odd embarrassing defeat suffered by the forces of Eurocentric imperialism, such that experienced by the Spanish with their initial contact with the Inca in the early 1500’s, and the British defeat suffered at the hands of the Zulu Empire in 1879.  However, a major ideological facet of this material domination lay in the myth of a ‘white’ Christian god who had sent his only son down to earth.  In the Judeo-Christian Bible it states that humanity is made in god’s own image, so the rampaging Europeans simply re-wrote history (if theology can be called ‘history’), so that ‘Jesus’ (i.e. ‘Yeshua Ben Yoseph’) was recreated as a ‘white’, Northern European.  If god is ‘white’, his son is ‘white’, and the ‘Europeans’ are ‘white’, then obviously – or so the rampaging Europeans thought – every act of brutality and unjust policy was by definition ‘god-like’, and a manifestation of god’s will on earth – mediated, of course, by ‘white’ people, who by default had become the only ‘true’ representatives of god’s will on earth.

This is a nonsense.  The European advantage over other cultures lay in its means of industrial output (or means of ‘production’) and nothing more.  If the Europeans had expanded across the world as a pre-industrialised culture, the odds would not have been stacked so strongly in their favour, and each military defeat would probably have been perceived as their god withdrawing his ‘sanction’ for their actions.  Even during the Crusades in the Middle East, the forces of Islam were more than equal to the task of repelling and defeating the forces of Eurocentric religion.  In fact, if any other culture had industrialised its productive forces at the time the Europeans did so, then everything would have ‘equalised’ on the world stage.  Jesus, of course was a man from the Middle East and was in no way a Northern European, but once this narrative was established throughout Christendom, it became an inherent method of ‘judging’ the ‘worth’ of other cultures and peoples.  Non-whites were deemed obviously a priori ‘inferior’, and this inferiority had a gradient from a yellow complexion, to a light-brown complexion, brown complexion, dark brown complexion, and black complexion.  This mythical ‘whiteness’ became a natural mark of ‘superiority’ across the board, with all white people being assumed to be automatically ‘superior’ to all non-white peoples.  This is ludicrous – as many white people have behaved in a thoroughly despicable fashion, and pursue cultural norms that many other people would define as ‘barbaric’ and generally of an ‘inferior’ nature.  However, because racism is illogical, no matter how appalling and regressive some groups of white people behave, the mythology of ‘pureness’ of the ‘white’ ethnicity remains ‘untouched’.  This is probably because of the Judeo-Christian idea that the white ethnicity is a product of god, etc.

In a continent such as Africa – the cradle of humanity – where the majority of people possesses varying degrees of ‘black’ complexions, it would be logical to assume that these very same black people are responsible for the progressive and advanced cultures that developed in these areas.  Egypt is an obvious example, but not the only one.  Africa had many developed cultures and cultural modes of behaviour, but that of ancient Egypt is particularly impressive because of the survival of its architecture in the form of pyramids and other structures.  Despite being thousands of years old, and built at a time when European cultures were very rudimentary, the pyramids represent a height of sophistication that was not matched in Europe at all.  Despite stone circles and other similar buildings in Europe, nothing matches the magnificent buildings of ancient Egyptian architecture.  From this architecture it is obvious that the thinking behind it was orderly and quite advanced in its use of logic (a long time before the development of ancient and classical Greece).  What does Eurocentric racism have to say about all this?  Well, it cannot allow any challenge to its distorted logic that white people (and their culture) are ‘superior’ to any other culture that has ever existed, and so it must ‘invent’ all kinds of counter-narratives in an attempt to ‘remove’ black cultural achievements from the historical record, and this is exactly what we are seeing today within the Egyptology field.  Black culture and history is a) denigrated, and b) denied as ever existing.  This attitude and approach is simply the pursuance of white racism and privilege in the modern day, disguised as ‘science’, when in fact it is nothing of the kind.  It is pseudo-science of the worst kind, as it is an attempt to ethnically ‘cleanse’ history of all ’blackness’ and it does not end with Egyptology.  White racism has spread throughout the world and for many people is the logical base for interpreting all events.  Black people envisioned, designed and organised the building of ancient Egypt.  Black people also devised the political, cultural and medical systems in operation, and over-saw the successful making of war either in self-defence or in attacking over states.  Western academia must be cleansed of Eurocentric racism, and Western academics must stop presenting black people and black culture as being ‘inherently’ inferior or non-existent.