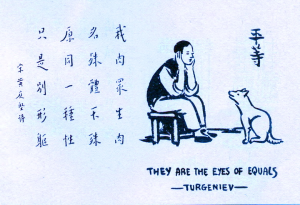 Translator’s Note: The following is a poem about ‘equality’ written by the Song Dynasty poet – Huang Ting Jian – which has been set to a picture of a human being looking at a dog – and a dog looking at a human being. Although the human seems ‘higher’ than the dog, in fact both are ‘sat’ down in a submissive manner, implying a certain ‘equality’ to proceedings. Furthermore, for reasons not explained in the original Chinese language article, there is a quote attributed to ‘Turgeniev’ in English, which I assume is actually the Russian novelist Ivan Turgenev (1818-1883). At first glance this seems an odd association, as Turgenev was a renowned hunter of animals. ACW 12.4.15

I am flesh, all life is flesh, as a body that is named, does not make it special. In origination, there is only one unifying nature, and this manifests in different (living) forms.