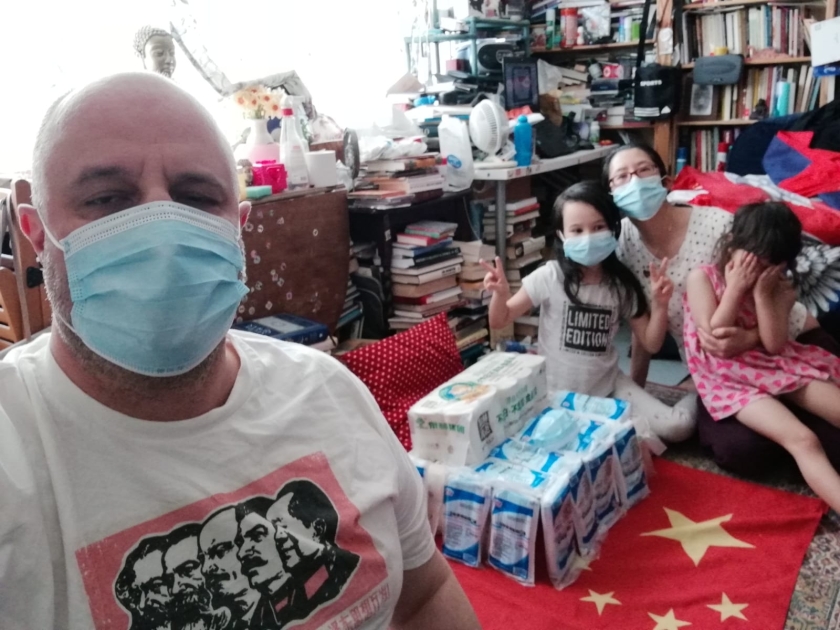 Mr Chen Gong (陈功) is a dear Comrade of ours and an academic who lives and works in Zhejiang province. He is also one of our direct connections to the Communist Party of China (CPC). He specialises in traditional Chinese religious teachings and is quite rightly opposed to the religious cults of the Falun Gong and the Pro-Tibetan Movement – as well as ‘Eastern Lightning’ (a Christian-terrorist group) and the various Western-backed Islamo-fascist groups attempting to infiltrate the Xinjiang area! On the other hand, Mr Chen Gong is a great source of support and a font of endless knowledge! One of his hobbies is a love for US basket-ball – despite the US continuously perpetuating many racist lies about China! This parcel contained hundreds of packets of face-masks – issued to us at a time when supplies were scant in the world! How grateful we have been for this help from the Communist Party of China – as my partner – Gee – works on the frontline of the NHS in the fight against Covid19 in London!

During early 2020, hundreds of NHS staff were dying in the UK from a lack of proper protective clothing – which the Tory government refused to supply! Gee survived these early days of Covid19 only because the CPC gave her masks to wear at work – when the British government did not care whether she lived or died! This is the power of Communism and the collectivisation of the working-class! Our Comrades in the CPC were shocked to see video-footage of shops with empty shelves throughout the capitalist West – and how people had no sense of solidarity with one another – but where fighting for packs of toilet rolls! All this madness was compounded by the idiocy and racism of President Donald Trump! He was spouting his usual nonsense and encouraging US anti-intellectualism to a new fever-pitch of intensity! Americans were already fighting one another through an enhanced racist division – with the US police murdering non-White people in an orgy of violence! This would culminate in the US police murder of George Floyd!

Communist China has built a ‘new’ society premised upon ‘equality’, ‘fairness’ and working-class ‘solidarity’! The transformation of the country has been tremendous since 1949! China, through its application of Marxist-Leninist (Maoism) has moved toward modernity in a decisive manner that has now caught-up with the capitalist West and is set to transcend even these achievements! China’s Space Programme is successfully moving forward and is seeking to land a woman Cosmonaut on Mars in the near future! In reality, Scientific Socialism is the destiny of the entire world! the working-class will eventually seize control of the means of production the world over and generate a truly global Revolution that will benefit the entirety of humanity (not to mention all other life-forms)!