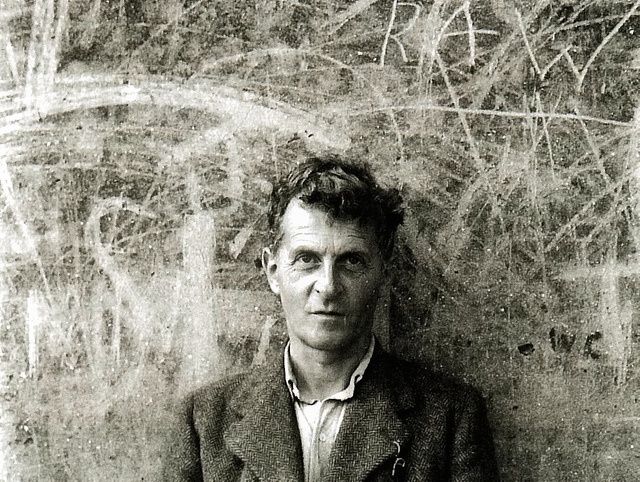 Ludwig Wittgenstein (1889-1951) was an outstanding British philosopher of affluent Austrian birth (his father had made his considerable fortune through the steel industry). As a consequence, Wittgenstein had a typical bourgeois upbringing in Austria that can only be described as ‘opulent’ in the extreme (when he finally inherited his father’s fortune in 1913 – he was one of the richest men in Europe), prior to his travelling to the UK to study aeronautical engineering at Manchester University in 1908. Due to his lack of experience in practical labour, Wittgenstein proved inadequate in the practical aspects of engineering, and instead turned his mind toward solving theoretical engineering problems through the use of mathematics – this is how he came into contact with Bertrand Russell’s text entitled ‘The Principles of Mathematics’ (1903). This experience led Wittgenstein on the altogether different path of abstract philosophical enquiry, that resulted in him relocating to Cambridge University, and studying under Bertrand Russell. However, during WWI (1914-1918), and despite his academic associations with the UK, Wittgenstein volunteered for military service in the Austrian Army – where he saw action on the Russian-front. After WWI, Wittgenstein continued to apply his mind to the central question of defining logic. This led to the 1921 publication of his Tractatus Logico-Philosophicus (Latin for ‘Logico-Philosophical Treatise’). This work is often categorised as the ‘Early Wittgenstein’, and in this 75 page masterpiece, Wittgenstein believes that he solves the problem of logic by stating that all language is comprised of ‘pictures’ that are used to explain or give meaning to thoughts in the mind and objects in the environment. According to Wittgenstein, language statements can be true, false, or meaningless, and that ‘logic’ is simply this language symbolism used in in a truthful or meaningful manner. As a middle class person, Wittgenstein lived the high-life of the true ‘individualistic’ bourgeois person – and this explains why – as a young privileged man – he treated language in ‘isolation’, (as if it only happened to one person at a time), and that the use of language was simply that of many isolated individuals quoting tautologies at one another. Being bi-sexual in nature, even his sexual appetites were as unhindered as his economic circumstance, and highly individualistic in nature. As Wittgenstein was trained as an engineer, it is reasonable to assume that he thought that logic could be (or should be) described as if it where a machine comprised of individually functioning parts, that when operated together, produce the desired ‘manufactured’ object. The Tractatus then, appears to be the product of bourgeois individuality, and mechanical determinism expressed as a cogent (youthful) intellectual idea.  Following the publishing of the Tractatus, Wittgenstein believed that he had solved the problem of logic by defining it as being the product of the individualistic use of a symbolic language (with each letter, word and sentence being a picture expressed in thought, through the voice, or as marks on paper, etc), and retired from the world of academic philosophy. What Wittgenstein did achieve with his early work was to draw the attention of philosophers to the very concept and functionality of the language they routinely used, but never fully or adequately assessed during their formulations of theories, ideas and concepts. As a consequence, Wittgenstein even considered mathematics to simply be an extension of language symbolism that only offers abstract truths about the physical world (but which cannot know anything for certain beyond its own symbolism). This is why Bertrand Russell considered the Tractatus to be a work of genius. After spending time teaching, travelling and partaking in various manual jobs, (including that of gardener in  monastery, and later a porter at London’s Guy’s Hospital), Wittgenstein began to mature through meaningful social interaction in the world, and as a consequence of beginning to experience life as understood by less economically privileged people as himself, his ideas about language (and its purpose and meaning), began to change. This led to his writing of his second work of genus entitled ‘Philosophical Investigations’ which was not published until two years after his death in 1953, but which was finished in reality probably by around 1948. It is evident that Wittgenstein was questioning his own theory of ‘isolated’ or ‘individualistic’ symbolic language as early as 1933, as can be seen from content of the ‘The Blue Book’. The content and conclusions of the ‘Philosophical Investigations’ is generally termed the ‘Latter Wittgenstein’ and differs from his Tractatus in that language is now re-interpreted as a ‘social’ or ‘collective activity that has no inherent meaning if the rules of the game are not understood and applied during meaningful social interaction. Bertrand Russell considered this paper to be mundane and in many ways missing the point Wittgenstein had established in the original Tractatus.