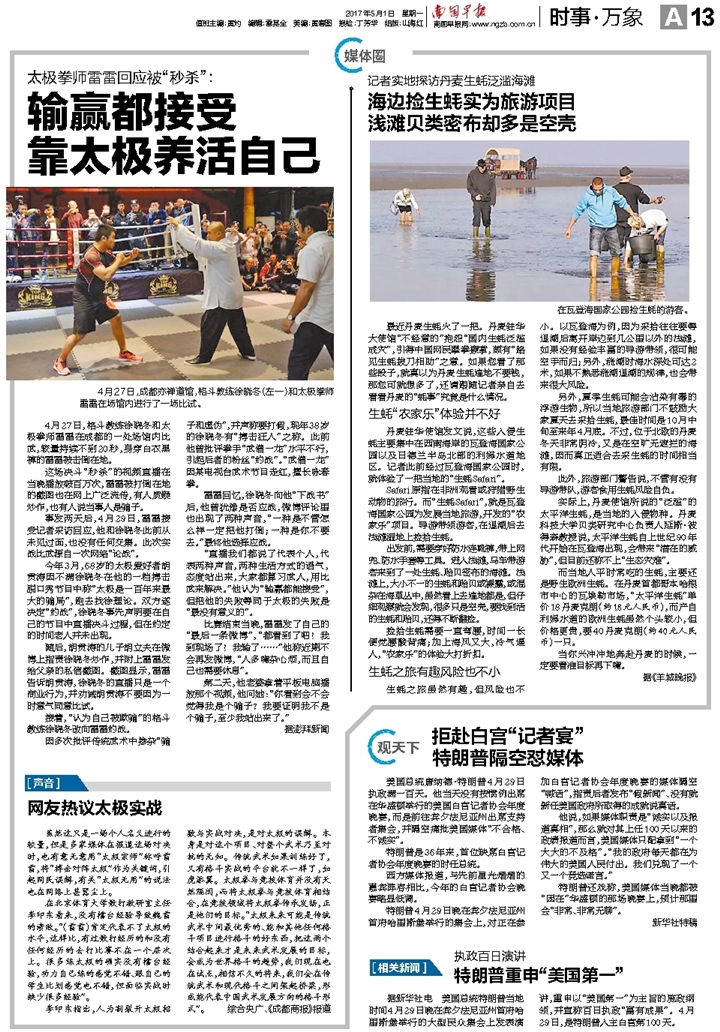 In a challenge match that occurred on April 27th, 2017 in Chengdu, Taijiquan teacher – Master Lei Lei (雷雷) – was repeatedly beaten about head after slipping to the ground by his opponent – MMA practitioner Xu Xiaodong (徐晓冬). Xu Xiaodong immediately uploaded the 20 second video to Youku, an act which caused instant country-wide controversy. How did this situation develop? Xu Xiaodong (who is motivated by profit) had been disrespecting a number of elderly martial arts masters – trying to goad them into fighting him on video. It is believed that Xu Xiaodong had been unduly influenced by corrupt Western sports, and had lost his sense of proportion and appropriate behaviour in public. Of course, there are some that doubt the authenticity of the fight, claiming both fighters were ‘acting’ to attract attention, but Master Lei Lei is known to be a quiet person who patiently teaches traditional Taijiquan to many people suffering long-term illnesses. and has never expressed any desire to hurt others or become famous. In fact, in an interview a few days after the ‘contest’, Master Lei Lei confirmed that he had never met Xu Xiaodong before having the fight, and that the fight took place only after exchanging viewpoints about martial arts on the internet.

Xu Xiaodong has courted controversy in the past, causing much offense and concern throughout the general public by criticising the famous Chinese Shaolin Temple lay-disciple – ‘Yi Long’ (一龙) who travelled to the West and honourably represented China in full-contact fighting tournaments. Xu Xiaodong stated that Yi Long’s remarkable martial abilities stemmed from him taking steroids and other performance enhancing drugs! Master Lei Lei, wanting to be honourable in the face of Xu Xiaodong’s ‘dishonour’ was unsure whether to go to the fight, but decided to do so as a means to protect others from Xu Xiaodong’s ignorance. After the fight, Master Lei Lei blogged that he had attended the fight and had lost. He did not mind the losing – as this was merely a personal matter – but he regretted being unable to decisively ‘better’ Xu Xiaodong, and set the record straight for Taijiquan practitioners everywhere. The next day he showed his wife the video of the fight – as he wanted her to know that he had ‘stood up’ in an attempt to confront tyranny.