I have been trying to compile a pictorial biography of the life of the great Buddha of compassion. Now, due to good co-operating karmic causes, this ambition has been finally completed. This visual history is an act of devotion to the Buddha – great teacher of compassion. Each picture is unique and contains individual notes that tell a story. This demonstrates that the Buddha once lived on earth and that his presence brought smiles to the faces of all beings. I intend not to damage the Buddha’s teachings, but to enhance them so that they can be preserved for all sentient beings, so that they may travel to the other shore.

If this action generates a little good merit, may it be used for the welfare of all sentient beings so that through their good conviction, the Wheel of the Dharma can be kept turning forever!

The Life of the Great Buddha 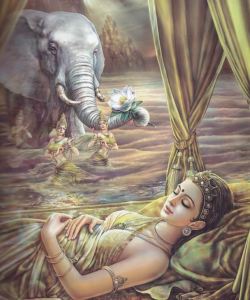 Dream of an elephant causes conception: the Buddha’s mother Maya Devi dreamed of a white elephant and becomes pregnant.

Seven Lotus Steps: Buddha at Lumbini Park was born from his mother’s right side, and immediately started walking; with every step a Lotus sprang-up. The infant Buddha pointed to the sky with one finger, and to the earth with another and said that he alone knew the truth.

Naming ceremony; the Buddha was born a chakravartin in the world. His father – King Suddhodana – loved his son and called him Siddhartha Gautama. 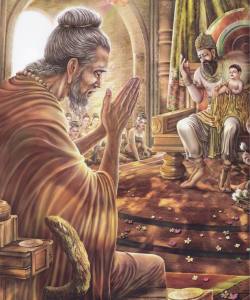 Holy prophecy; the Buddha’s father invited a great and old holy man to read his fortune. He wept as he said that Gautama would become a great enlightened being – but as he was already – he would not live to hear his teaching.

Embracing meditation; as a child, the young Buddha saw an eagle hunting a snake and his heart was moved with compassion. He retired to his room to meditate. 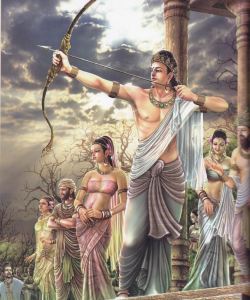 Martial training; at the age of 16, the young prince was proficient in both martial and civil leadership skills.

Marriage; as the king saw that his son was unhappy – he arranged for him to marry the beautiful Queen Yasodhara.

Much beloved; the prince and his young wife.

Disgusting desire; the young prince saw the dancing and serving girls asleep at night without their make-up and finery and was disgusted with human desire. 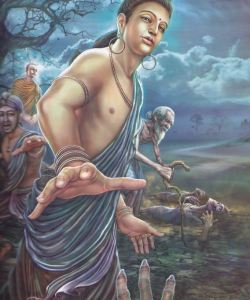 Tour of the city; the young prince ventures out of his palace and sees illness, old age, death, ad in the midst of it all – a Brahmin priest with a peaceful mind. He was moved by compassion for all beings and decided to strive to break the wheel of reincarnation and suffering for their benefit.

Keep away from the kingly life; the Buddha was determined to renounce his luxurious life of wealth and pamper. He vowed to find the answer to life and death, illness and old age, as well as to break the cycle of rebirth and suffering.

Cutting hair and throwing off clothing; the Buddha cut his hair as a sign of renouncing the world. He also threw away his ordinary clothing to wear that of an ascetic.

Unbearable asceticism; the Buddha followed the paths of severe asceticism, but found that these methods did not achieve the highest goal of full enlightenment. He gave up these practices as not profitable for the search and instead developed the idea of the ‘middle way’. 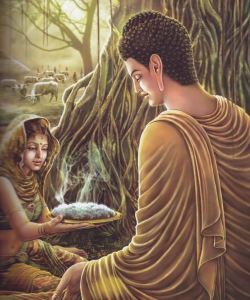 Many offerings; Siddhartha recovered his strength by receiving alms of milky porridge. 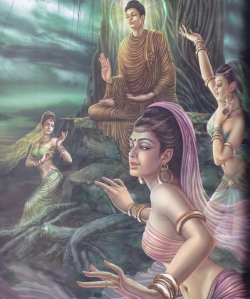 Mara’s Daughters; whilst the Buddha sat, Mara – the devil of desire – became concerned that the Buddha might succeed in breaking the chain of desire and so sent his three beautiful daughters to seduce him, but the Buddha remained unmoved. 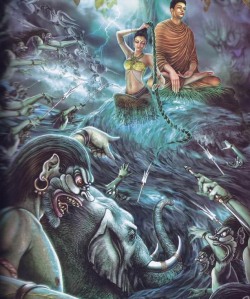 Demon army; seeing that the Buddha was unmoved by his daughters, Mara sent an army of devils to kill the Buddha – but his concentration was so strong that they could not harm him. 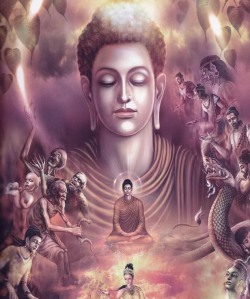 Demon army defeated; through the power of his concentration, the Buddha defeated the devil army and forced it to  withdraw. 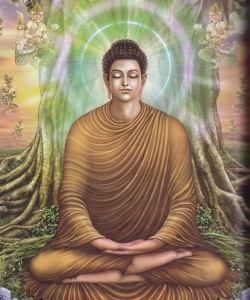 Enlightenment: Buddha – during the last part of the night – looked at the stars and realized the essence of the universe, and understood that all sentient beings have Buddha wisdom! Since then, the Buddha manifested the perfect achievement of universal perfect compassion and wisdom. 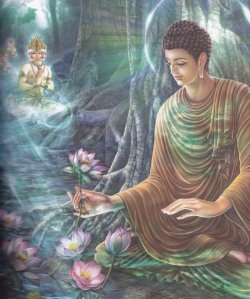 Brahma offers flowers; the god Brahma came to the Buddha with an offering of flowers and asked the Buddha to teach the Dharma for the sake of all beings, out of compassion and wisdom, so that all sentient being might benefit from his profound enlightenment. 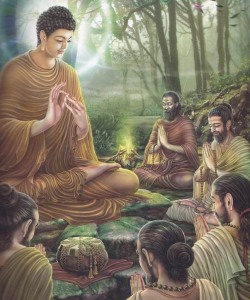 The Buddha began teaching his disciples in Sarnath. 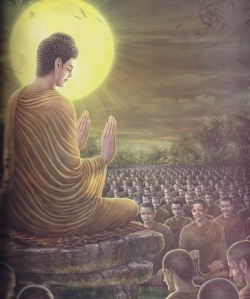 Teaching all beings; the Buddha taught his disciples to uphold the Middle Way, by developing a humble attitude toward life whilst walking around and setting an example to bring enlightenment to all beings. 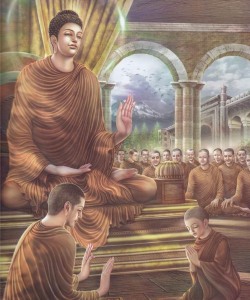 His son becomes a monk; the Buddha has a son – Rahula – who worships the Buddha and requests to become a monk under Sariputta. 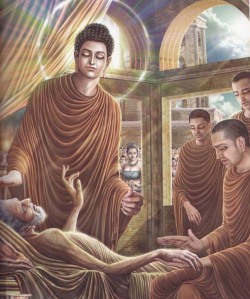 Father’s death; the Buddha saw his seriously ill father and transmitted the Three Refuge Formula – Triple Gem. After his father died, the Buddha set an example of filial piety to the world and carried his coffin.

Teaching Dharma to divine-sky beings; the Buddha teaches the Dharma in the divine-sky realms to repay the debt of kindness he owed his deceased mother.

Return to earth; the Buddha descends back to earth after teaching the Dharma with respectful divine-beings all around. 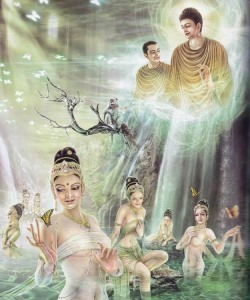 A prince lusted after his wife, and did not want to renounce the world. The Buddha took him up into the divine-sky realms where women appeared extremely beautiful, but when he looked down to earth – ordinary women looked like baboons in comparison. This understanding encouraged him to consider becoming a monk. Later, the Buddha took the same prince down into a hell created by the desire of excessive sexual desire. This experience finally freed the prince from the trap of lust. 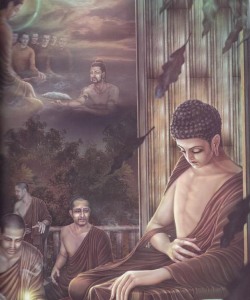 Last meal; the Buddha ate his last meal and told his disciples to remember that all is impermanent and subject to change. He told them that he was about to enter the Final Nirvana.

Entering the Final Nirvana: the Buddha’s disciples prepared for the Buddha’s passing after his final disclosure. He serenely lay on his right and entered Nirvana. All the people wept to see the Buddha and the earth shook. Humans and gods were sad because they were afraid the Buddha had left them alone. The Buddha did not really leave humanity alone as he had left them his teachings. He had lived in the world a long time – before entering Nirvana – this shows the Buddha’s good intentions in teaching the Dharma! However, the Buddha incarnate is found within the ever present Dharmakaya – this is why he founded the Buddha-Sangha, to guide humanity and bring peace and wisdom to the world. This brings a continuous blessing to all sentient life.

After arranging these pictures and writing the texts, my heart is full of emotion. Unfortunately, these few passages cannot hope to convey the true power of the Buddha’s wisdom or the depth of the great Buddha’s compassion.

Although the Buddha exhibited many behaviours and attributes that maybe considered ‘miraculous’, he never claimed to be a ‘god’, or to be part of a theistic religion that claimed to have created the world. In this regard, the Buddha’s philosophical path is quite different. Even within these ‘scientific times’, the Buddha’s path still stands-out. The Buddha does not demand ‘faith’, but rather relies upon the use of logic and experience as a way to discover the truth. Therefore it can be truthfully said that the Buddha’s path is not at odds with the scientific method. The Buddha taught that everything is manifested within the mind – be it godly realms or hell – and that the six senses are ultimately empty of any substantiality. To transform life from suffering to happiness surely it is more profitable to pursue the Dharma and overcome delusion by penetrating the empty essence of reality. Surely this is more important to end the cycle of rebirth and suffering?

After more than 2500 years this disciple of Shakyamuni Buddha has arranged this biography as an offering to my respected enlightened teacher out of a sense of humility and respect. I have a teacher who has shown the path through suffering, and who is beyond the triple world, the realms of humanity and of gods. His philosophy is beyond religion and cannot be limited to academia. In this way the Buddha leads all sentient beings to the other shore without exception.