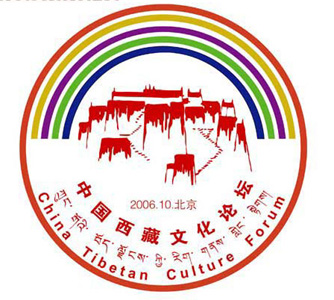 The overall design of the Emblem highlights the outstanding cultural traditions and discussion themes relevant to Tibetan culture. The emblem is round, and the upper part is composed of red, yellow, blue, white, green and other coloured stripes that are popular among the Tibetan people. The central part of the emblem is the Potala Palace pattern drawn by the lines of ink and shadow. It has Chinese characteristics. In the lower part of the Potala Palace, the words “China Tibet Culture Forum 2006.10. Beijing” are written in Chinese, Tibetan and English.