In the frame, on the night of March 27-28, crosses were made on the territory of the Azovstal plant to receive Ukrainian helicopters, with the

END_OF_DOCUMENT_TOKEN_TO_BE_REPLACED 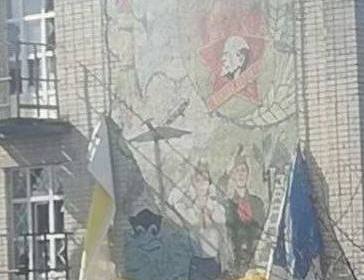 END_OF_DOCUMENT_TOKEN_TO_BE_REPLACED

⚡️In the USA they asked for the coat of arms of Ukraine Approximate translation: – Hey bitch, do you support Nazism? My grandfather fought against

END_OF_DOCUMENT_TOKEN_TO_BE_REPLACED

He has combatted and expelled (as far as possible) the most obvious examples of Neo-Nazism from the Russian interior (whilst curbing the excesses of religion), and has re-established the May 9th Victory Parade with Red Flags and pictures of Lenin! He has also re-established a Russian sense of ‘self’ within all this cultural pollution originating from the wholesale adopting of the Western capitalist ideology! It seems to me that his decision to enter the Ukraine and deal with the Western-backed Neo-Nazi regime operating there since 2014, is part and parcel of his ongoing policy of ‘purifying’ the Russian (Slavic) character, and it is interesting that when push came to shove, Vladimir Putin chose the side of anti-fascism and decided to take-on the Neo-Nazis rather than fall-back on keeping the Western powers ‘happy’ whilst the Slavic people suffer!

END_OF_DOCUMENT_TOKEN_TO_BE_REPLACED

There are countless examples of duplicate news items presented in this manner on the US-controlled internet! These negative narratives are not new and can be traced in the ‘fake’ manner in which the West has misrepresented the history of not only Soviet but also Czarist Russia! It is an absurdity of ‘reading’ implications into events that are irrelevant and just do not exist! An event might be “factual” but is presented in a “fictitious” manner as a means to manipulate the thought processes of the intended audience toward a certain, desired and preferred interpretation (regardless of what is really happening)!