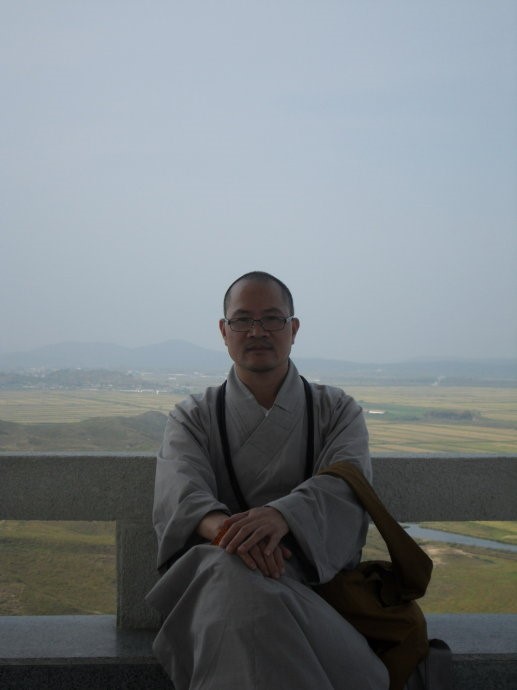 Vice President and Secretary General of the Fujian Buddhist Association

Speech Delivered at the Symposium on Construction of Modern Culture

Dear Honourable Guests – including President Xue Cheng (学诚), Minister Lei Chunmei (雷春美), Deputy Governor Liang Jianyong (梁建勇), Secretary Cao Zhongjian (曹中建), and Professor Yang Cengwen (杨曾文) – I am honoured to have been invited to this picturesque ‘red’ land. Not only is this the place of the Gutian Conference, It is also an area famous for hundreds of years of Ch’an lineage transmission. The Ch’an tradition is an important school within Chinese Buddhism, with the ‘Fa Yan’ (法眼) lineage forming one of its five branches. This is particularly true of the Longyan area, where the ‘Fa Yan’ lineage has been passed down from master to disciple through many generations, with a number of temples being founded just to propagate this lineage such as found on Tian Gong Mountain (天宫山 – Tian Gong Shan). This is important because the Ch’an School encourages a spirit of innovation, critical thinking, practical action, integration and co-operation, psychological development, and a compassionate attitude toward all living things. All this is passed on through the Ch’an transmission, and has significance for the revival and resurgence of traditional Chinese culture within a modern cultural context. Ch’an Buddhist culture is an important component of traditional Chinese culture. The most important of the core elements found within traditional Chinese culture are Confucianism, Buddhism and Daoism. However, of these three, it is emancipatory Buddhism that has spread far and wide – not only through every corner of Chinese society, but also across the world. This means that of the three spiritual traditions in China, Buddhism has been the most influential.

My first point is that Buddhism has served as a philosophical, ideological, and cultural vehicle for the preservation and transmission of traditional Chinese culture, both historically and within modern times. By way of comparison, this depth and breadth of influence has not been matched by Confucianism or Daoism.  Even if this is true about Chinese Buddhism in general, it must also be recognised that Ch’an Buddhism is probably the most powerful form of Buddhism in both its philosophical and methodological development. It is robust and strong school that demands the highest standards and seeks nothing less than complete and full enlightenment here and now. The monastic discipline of the monks and nuns is excellent, and there many fine (and ancient) Ch’an temples scattered throughout the mountains of China. Just as Ch’an transmits traditional Chinese culture, so has Ch’an become deeply imbued with traditional Chinese culture and its associated attributes.

My second point is that Ch’an can serve as a vehicle for the revival and resurgence of traditional Chinese culture. In modern times, China learned Western culture and during that process, was taught that there was something wrong with Chinese culture. This created the situation whereby traditional Chinese culture was fractured and began to be misunderstood and only partially transmitted. However, the Western culture studied proved not to be unsuitable for Chinese people. Even today, it is often the case that some people in China implicitly accept the (imperialist) myth of Western cultural superiority, and in so doing sell their own traditional culture cheaply! This leads to a state of alienation between contemporary Chinese people and their historical (traditional) culture. During the collective study of the Politburo in 2014, President Xi emphasised: ‘Cultivating and promoting the core values of Socialism must be based on the excellence of traditional Chinese culture. These solid core values have their inherent fundamentals. Abandoning traditions and discarding fundamentals is tantamount to cutting off one’s spiritual lifeline.’ When at the UNESCO headquarters in Paris, President Xi said: ‘Buddhism, after its introduction to China, merged with the Chinese Confucianism and Daoist culture to form a Buddhist culture with Chinese characteristics, and left a profound influence on Chinese people’s religious beliefs, philosophical views, literary arts, etiquette and customs.’ From these observations it is clear that if the Ch’an tradition is allowed to diminish, if temples fall into disrepair and the numbers of monks and nuns diminishes, then an important conveyer of traditional Chinese culture will be weakened and rendered ineffective.

My third point is that the tradition of Chinese Ch’an Buddhism possesses the capability to integrate with modern culture, whilst still serving the function of conveying traditional Chinese culture. The 4th World Buddhist Forum was held in Wuxi, and the topic was entitled ‘We wish to work together and exchange ideas’. The Chairman of the National Committee of the Chinese People’s Political Consultative Conference – Yu Zhengsheng (俞正声) – sent a congratulatory message to the Forum. He said: ‘In the history of humanity, Buddhism has provided an important model for successful exchanges and mutual learning between different civilizations. It has established a successful model and built an important bridge-link for the advancement of people’s friendship.’ At the Opening Ceremony of the Forum, Minister for the Central United Front Work Department – Sun Chunlan (孙春兰) – said: ‘The vitality of religion lies in its willingness to assist the development of society. The influence of religion lies in the exchange of knowledge with various cultures. The appeal of religion lies in the active leading role of religious people.’

From this we can see that Buddhist culture is always integrated with social development. The essential spiritual values of Buddhist culture, such as compassion, wisdom, tolerance, inclusion, meditation, repentance, harmony, adhering to the middle way, reconciliation, and living inaccordance with nature, are all of positive significance for promoting the spirit of the times and assisting the construction of Socialist core values. Taking Ch’an as a medium, it is an effective way and method for personnel exchanges, people-to-people communication, cultural exchange and mutual learning in the ‘‘Fa Yan’ (法眼) lineage (一带一路 – Yi Dai Yi Lu) strategy.

1) We must grasp the Chinese spirit of Ch’an and understand the cultural historical significance of what it means to ‘inherit’.

2) We must remember the influence and localised transformative effect of the powerful spirit of Chinese Ch’an Buddhism when it is transmitted overseas.

With regards to the 1st principle, after Indian Buddhism entered China, its theory, discipline, organization, system, even clothing and diet were all reformed in the Chinese-style, and took-on distinct Chinese characteristics. President Xi said: ‘The Chinese people have developed Buddhist ideas based upon Chinese culture and formed a unique Buddhist theory.’ ‘Moreover, it has spread from China to Japan, Korea, and Southeast Asia.’ At the Central United Working Conference held in May 2015, President Xi clearly pointed out: ‘Religions must adapt to the conditions of a Socialist Society, and must assist in China’s political, social and cultural development.’ He also said: ‘We must guide religious efforts to promote economic development, social harmony, cultural prosperity, national unity and the unification of the motherland.’ Chinese Buddhism can continue to be inherited in the modern world, and its broader Chinese cultural basis is the important reason why this is the case.

With regards to the 2nd principle, Indian Buddhism was transmitted to China so that it could become established in our country. If we transmit Chinese Buddhism to the world, it will become a world Buddhism with Chinese cultural characteristics. The famous British historian Arnold Toynbee said: ‘The 19th century is the British century, the 20th century is the American century, and the 21st century is the Chinese century.’ Chinese culture, especially Confucianism and Mahayana Buddhism possess the ability to jointly lead humanity out of confusion and misery. In the ‘One Belt and One Road’ strategy, economic and political exchanges should be preceded by cultural exchanges. The rooting of Chinese culture in the host country is the foundation for the economy to take root. Chinese Ch’an is becoming popular in the world, especially in Europe and the United States, and is an effective and powerful cultural attribute that can be used to engage the West. However, the localization strategy of projecting Chinese culture is the decisive factor for Chinese Ch’an to take root overseas. For this reason, the construction of a localized system in the foreign countries designed for the dissemination of Chinese Ch’an culture overseas, has also become an important foundation for China’s traditional culture to successfully go out and take root in the developmental and achievement climate.

I would like to add that the ‘Fa Yan’ lineage of the Ch’an School is particularly well-placed to assist the revival, preservation and transmission of traditional Chinese culture within a thoroughly ‘modern’ setting. The ‘Fa Yan’ tradition is ancient and has survived for hundreds of years as a distinct and intact transmission of Ch’an Buddhism. The ‘Fa Yan’ lineage of Longyan can be very useful and serve China faithfully in this task. I emphasis to ‘Fa Yan’ practitioners that birth in this world is a rare occurrence, and that once achieved it must be used well. Assisting the development of modern China whilst simultaneously transmitting the essence of Chinese traditional culture is a great and noble task, the fulfilling of which means that an individual life is not wasted, but used in the best possible manner. This is because a life spent in idol gossip or pursuing base desires is like already being a member of the walking dead! The worth of a life can be measured in many different ways, as everyone has a different mission and a specific direction. It is important to cultivate a calm and expansive mind so that wisdom shines brightly in the ten directions, and the means of continuous correct action is intuitively known here and now. What better way is there, than living a life full of positive purpose!