The 84-year-old Chinese man named Huang Jing (黄镜), was walking along 96th Street on Broadway (in Manhattan) at 5pm on the 19th of January (2014), when the United States police suspected him having crossed a road whilst the traffic-light was ‘red’. There then followed a misunderstanding due to a language barrier. Huang Jing was born in Mainland China and can only speak Cantonese and Spanish.  As Huang Jing could not understand what was being said – he was beaten to ground by a number of police officers and suffered a wound to the back of his head – which was later treated in hospital (receiving stitches). 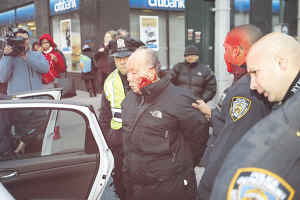